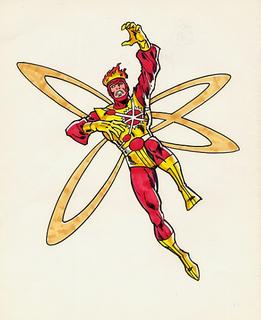 In cooperation with The Absorbacon (see the "Links" section), "Seven Hells!" would like to nominate Firestorm, The Nuclear Man!

In a very Marvel-like fashion, teen dumbass Ronnie Raymond stumbled into his powers via stupidity and radioactivity. Ronnie eventualy went on to become a male underwear model.

That's what The DCU needs, another Ashton Kutcher with a nuclear reactor in his chest.

but we're keeping the Black one. I kinda like him.

So, check out "The Absorbascon" tomorrow to see who draws "lucky" 39 in the "Character Donations."

Comments:
Firestorm is a bit redundant in the Marvel Universe, though, isn't he? I mean, he's got (the Bizarro version of) Peter Parker's personal life and a fairly minimal 'What if' twist on the Hulk's Origin, combined with Molecule Man's powers.

If we give him to Marvel, they'll just end up re-gifting him to Image or somebody next year...

Firestorm was one of my favorite characters as a kid. And while I admit Conway was inconsistent, I still ejoy much of his run. There's a lot of ideas there that I still like. Of course, Ostrander had some great stuff after an awkward start on the character (though he eventually changed just about everything about the character, including his powers).

Firestorm's a hero that hasn't been given a chance for way to long. Here's a character who was popular enough to last for 100 issues, and yet only 2 writers had written the character for any length of time. Obviously the character had at least decent selling appeal. The fact that it took DC 14 years to hand the character to a third writer and say, "here, you do something with him", is an oversight on DC's part I just don't understand.

Actually, that's not true; I do understand. Almost immediately after DC got Captain Atom it seemed deliberate DC policy to promote its aquired character and abandon it's homegrown one. A letter column towards the end of Firestorm said that Ostrander informed them he would leave, and then the editors decided to give the character a rest. I think they just wanted to focus on only one nuclear man in the DCU at a time.

[side note: I always felt Firestorm's powers of transformation and his identity as 2 merged people make him somewhat more unique in comics than the man who's an outsider (because he came through time) and shoots rays out of his hands. If they wanted a Captain Atom type character in the DCU they should have taken Starfire, the woman who's an outsider (because she came from another planet) and shoots rays out of her hands. She already was nicely tied into the DCU's history.]

Superman is a fantasy character imagined from the science knowledge of the late 19th/very early 20th century, where planets span the universe with different color suns, different gravities, traversed by an electromagnetic spectrum that includes infrared and x-ray energies. Firestorm is a fantasy character that springs from somewhat later science knowledge, a much better knowledge of what those suns are made of and how those energies are produced.

Of course he belongs in the DC universe. Generational characters? Firestorm was Wally West with scientist Barry Allen floating around in his head providing commentary. A dynasty? Well, Firehawk was a start, and later DC tried to shoehorn Captain Atom in. Let him grow up and he'd develop a larger one. He may be the most powerful non-magic based character in the DCU, so it was believable that he'd serve alongside Superman and Wonder Woman.

Firestorm's a character who needs the broad universe he'll never get in Marvel. He's been an icon in waiting for awhile. DC just needed to give him to a 3rd writer.