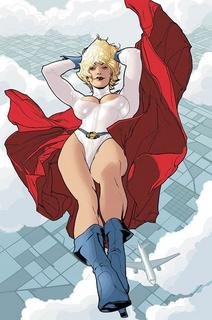 Rocketed to Earth as a teenager, Power Girl seemed tailor-made to believe she could be Superman’s cousin. She could fly at super-speeds, possesses invulnerability, eventually adopting a similarly evocative codename. The Justice League accepted her, The Justice Society gave her a life, a new name, Karen Starr. More importantly, Superman accepted her. She had all she’d ever wanted and then…The Batman. The World’s Greatest Detective found her story to be a lie. As much as she and everyone wanted to believe, she wasn’t Kryptonian and this would be the first of many heartbreaks for this young hero. She’d later come to believe she’d found her heritage in Atlantis only to find out that that too was a lie. She pretty much let Karen Starr die, choosing to become Power Girl full-time, bouncing about The DC Universe looking for someplace to belong. She joins Justice League: Europe, later joining a loose team of heroes named The Sovereign 7. Left with nowhere else to go, she returns to The JSA. Then, that’s where things get weird again…


JSA: Classified #1, is what it is. Besides, letting you know let's me post the most beautiful image in the world to the right.

'bounce about the DC universe' is dead right.