Lest We Forget...The Red Tornado

Remember a day when being an android housing a living tornado meant something to people?

How could you not love him? He looks like a racecar and... he's Justice League.

Now, I'll be the first to admit that he hasn't had the most glorious history but he's got something going for him someone the likes of Firestorm doesn't have: legacy.

Drawing inspiration from the superheroes of DC's Golden Age, "Ma" Hunkel donned a cooking pot and a union suit and fought crime in the streets of New York. She was never officially made a member of The JSA but was afforded a sort of "honorary" member status. After living for decades in The Witness Protection Program to keep her children out of harm's way, "Ma" was welcomed back, with open arms, to The JSA by none other than The Golden Age Green Lantern and Flash, Wildcat and Hawkman. She currently serves as The JSA's curator and defacto housemarm, giving whacks to Wildcat's thick skull and hugs to younger JSA'ers such as Power Girl and Stargirl.

Some years later, on the planet Rann (Where there's ALWAYS some crazy Adam Strange-induced crap goin' on.), the living cycle known as The Tornado Tyrant broke free, finding its' way to the planet Earth. Soon it found itself in the clutches of the villainous roboticist T.O. Morrow. Morrow , in an inspired moment of brilliance, fused The Tyrant into an android body, dubbing his new creation...The Red Tornado. Evil Morrow then sent his creation off to do what Silver Age "legacy" characters did back then: join a super-team. Only this time, to destroy them. 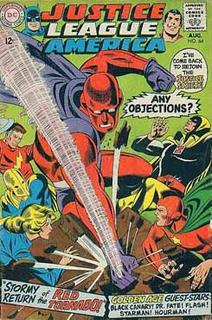 Encountering first, The Justice Society, he almost immediately turned on them. Later, with the Justice League entered the fray, Red Tornado broke free of his creator's programming to later on become a valued member of The 70's "Satellite" The Justice League.

Upon the 90's disbanding of The League, Red Tornado found himself as a member of The Forgotten Heroes...oops,I meant, Primal Force, later going on to briefly mentor DC's third generation of superheroes, Young Justice (Robin, Superboy, Wonder Girl and Impulse).

Not too shabby, huh, except when you consider that his current appearances always seem to come down to this...

DC, stop. Stop the madness. Please realize what you've got. You've got a Justice League character housing a FORCE OF NATURE within his chest. Use him. Make new fans understand how extraordinary of a character Red Tornado can be. 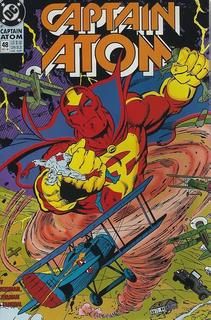 I'm begging you. You have a universe full of gems that you seem to keep trapped in a vault. Gems only glisten in the the light.

Comments:
He does look a bit like a racecar and if you'll notice...his logo looks almost exactly like the Hot Wheels logo.

You are HIGH. I mean that in a good way

I dunno... an android with a quasi-villainous past and a history of getting destroyed and rebuilt again? Sounds like the Vision, and we can't have two sorta kinda vaguely similar-themed characters in two different companies! Why, that strikes me as a half-assed reason to donate him to Marvel!

Great character treated poorly, especially in the handoff from Primal Force to Young Justice, where Peter David pretended the other book never existed and RT had been in cold storage next to, like, a giant Batman penny or something since the 70s.