Better yet, I didn't care for Dick Grayson as Robin.

He was always crying, gritting his teeth while screaming about his wanting independence from Batman. While doing so, he was sleeping with a big-breasted, alien warrior princess from a race descended from cats.

That The Batman allowed him get away with this sh*t without disowning him was not only a testimony to tolerance and good parenting. I will live if my child is not what I expected him or her to be. Boy or girl. Straight or gay. I'll deal. Only one thing, one thing could cause me to disown my child: his or her becoming a furry.

Dick Grayson is something of a furry.

Through the years, Dick lived up to his name, while changing his other name, bringing along a rather dubious change of costume. He also went on to grow a mullet and then a ponytail eventually realizing how low he'd sunk, he left The Teen Titans.

Then, something good happened. With one issue, writer Chuck Dixon got to him and finally.... let Dick's balls drop.

The first thing did was establish him in his own city, just outside of Gotham. The second? He cut off the ponytail. Third, he had him doing what he was born to do: kick ass!

Keep in mind, up to this point, I was still only liking "the kid." He was still the original Robin. You had to like him. Loving the character of Batman is kinda like falling for a woman with kids. You've gotta learn to love those kids if you truly wanna be with that woman, no matter how knotheaded the kid may be. Even if the kid's Azrael.

It was with issue 19 that I finally got Nightwing.

Gotham City, the city that adopted Dick as one of its' own, has been hit hard by an earthquake. Fatalities haven't yet been tallied. They cannot even be guessed at. Emergency services are stretched to their limits with no relief in sight.

In Bludhaven, a TV screen screams of the horrors witnessed and those to come. While everyone talks and assesses the damage, Dick Grayson has already left Bludhaven to go home. 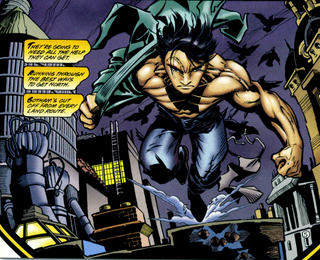 The only access to Gotham is by boat and upon his arrival, he's stopped cold by the sight of the unrecognizable thing trying to pass itself off as Gotham. He allows himself this moment, to let his mind linger. He asks, "How...?," but knowing it's the wrong question, he asks, "Where?" He knows there are others who need him. Something catches on the the boat's police band radio...

A bus with eleven on board has fallen into an earthquake-created sinkhole. Water from broken water mains fills the bus, threating to drown everyone on board. Emergency services are already overwhelmed. If these people are to live, they'll need help now. With nothing but himself and a rope, he descends taking command of the situation, calming fears, enabling those who moments ago were near death. A mother asks that her child be taken first. Scared, not for himself but for his mother, the child asks "Batman" if he'll save his mommy. 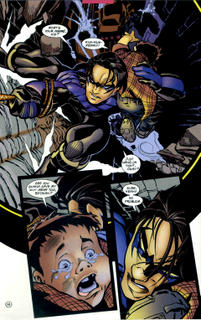 Nine more trips, hand over fists to the top with Kenny's mom staying below to help the injured.

Gotham shudders. An aftershock. Ground gives and metal twists as the city threatens to swallow whole one of her children. It won't happen. Not this day. Nightwing made a promise to save this child's mother. In the coming days, he will need her more than the city ever will. The bus floods. The fissure closes. A child screams. A promise is kept. 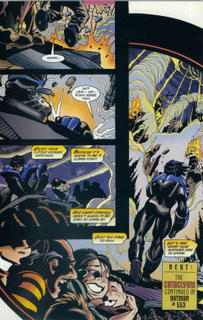 Before the night is done, more will be made...

and that is why I love Nightwing. He won't quit. He simply doesn't know how not to. In that, he's more like his "father" than he'll ever realize.

Comments:
(Is Starfire really supposed to be furry? I always thought she just had orange skin....)

Chuck Dixon really hit the ball out of the park with his version of Nightwing. It's really the first time we see Dick Grayson as his own man, distinct from his mentor, but self-confident enough that he's not constantly *asserting* that or whining about it.

I especially liked the "Dick Grayson joins the Bludhaven Police" plotline, too, where it really looked like he could wind up making a very UnBatman decision - that maybe Bludhaven needs Officer Dick Grayson more than it needs Nightwing.

Starfire is, in fact, furry.

Also, God, yes, Nightwing #19 is fantastic. Easily the best issue of that silly bat-quake malarkey. There's a chunk of that series that's ridiculously good, both story- and art-wise, and it's almost enough for me to forgive Scott McDaniel for designing that nightmare of a costume he put Daredevil in for a while.

To borrow the parlance of Dave's Long Box, that's a F*@% YEAH! moment.

See, I don't know why they've not done a Nightwing cartoon. He's much more suited to the ninja stylings of this new The Batman show than his mentor is.

And I just noticed that this was a DC hero being heroic! When did that last happen?