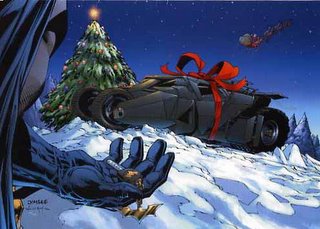 Growing up, I never knew how to reconcile it. On the TV show, he was decoding clues found in alphabet soup. In the cartoons, he startled easily, shouting "Great Gotham!" at anything that moved. I remember having trouble with this guy. He smiled... alot. In the comics, he didn't smile much. He was all business. If he came across a clue, he went about the work of solving it. Clues would be carefully stored in a vial from his belt to be later analyzed. I liked this guy the most but...

that guy on the TV show was kinda funny with his shark repellent and excitable little boy.

The guy on the cartoon was O.K. by me, as well. He always seemed to have the answers. He was smart like a scientist or something.

I liked them all and the older I became, I realized they were all, in a unique way, right. The minute you found him in the comics, you found him. That true man. The one who lost so much and gave himself over to justice. The idea that some writer could take from that horror, the idea of making this character leap across a typewriter or do The Batusi is utterly fascinating.

Batman is the Swiss Army Knife of comic books. Put him next to Guy Gardner and he becomes a straight man. Put him in a room with a dead body, he becomes The World's Greatest Detective. Yes, Batman is MacGuyver, Abbott and Sherlock Holmes, all-in-one. I love him for that.

At the end of the day, what I like most is his compassion. That, he would forego everything at night to bring a better day is to me, what he's all about. The days are simply better with The Batman in them.

Plus, I hear he's a good dancer.

Comments:
Wow. I think you just perfectly summed up one the reasons I used to like Batman so much - he did sacrfice his nights to make a better day for Gotham.

I don't know when, exactly (Knightfall?), but at somepoint I feel like they lost that element of the character.

Sure, it's a little goofy in places, but you really get a feel for the guy who's trying to make tomorrow a little better. I guess that's why modern Batman makes me so sad. It's like his superhuman willpower and mission aren't enough anymore -- he has to be the team's "conscience," which basically just means he has to be an asshole and a jerk to all those stuck-up spoonfed metahumans who can fly and shoot fire out of their eyes.

It used to be about doing the right thing.

Whereas Superman is almost always, well...

What's happened to the Bat is a natural progression. If Batman did exist, surrounded by idiots like Green Arrow, he probably would turn into an asshole. It's the only way to deal with jockeys like Hal having the most powerful weapon in the universe. You'd naturally get slightly annoyed after a while.

That's just one of those Christmas cards artists do, right? They haven't actually given comics Batman the Batman Begins Batmobile have they?

Nope. It's just a Christamas card.