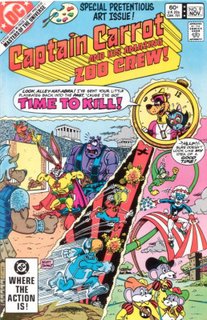 Assist me to the couch. I think I may faint! This Newsarama article contains many and varied things but the thing that caused my vapors was this:

"As mentioned by Geoff Johns in his Newsarama Q&A, Captain Carrot is also slated to appear in Titans."

Some buy me a couch so I can faint on it, dammit!

How's this going to happen? Will Krypto get into Starfire's Tamaranian peyote garden, conjuring up The Zoo Crew whilest feasting upon the entrails of a green cat?

Comments:
CC&tAZC was the first comic I ever had a subscription to.

There's also a 6-month period where my entire drawing output was composed of different pictures of Fastback in action.

So, in other words, I'm stoked.

Sorry, can't assist you to the couch. I have already fallen over dead.

I read a few weeks back that the Zoo Crew were going to appear in a comic-within-the-comic sequence, sort of like the pirate comic in Watchmen. Except, y'know, with less bloated corpses and more talking animals.

And as if finally brining the Crew back to the public eye wasn't cool enough, Scott Shaw will be doing the honors on the art.

So, wait, is this the story where Captain Carrot attacks the rest of the Zoo Crew because someone has taken control of his brain?

Or is this the one where Yankee Poodle gets brutally raped and immolated?