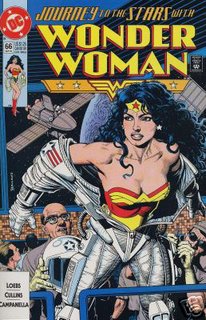 Comments:
Swamp Thing did not exactly 'go off to space'; he was sent there quite against his will, and the only issue he had to soul-search about was the fact that he'd been sent to space against his will with no way to get home...

So doesn't quite fit the pattern.

Jack Knight had the ginchiest, most tricked-out, prettiest space ship ever though. Plus, he had a Mother Box programmed with Ted Knight's personiality.

That's one of the best damnations I've even seen, DVS.

A year in space, regardless of the reason, is basically a gigantic filler issue.

I'm the exact opposite, I love space adventure. It's just something about the vastness and the ability to go anywhere and still end up in trouble.

I'm gonna argue against the inclusion of Jack Knight in the context of your argument. I'd have to re-read the stories again, and if I'm wrong, tan my hide, but with the exception of meeting Jor-El, Jack was pretty much in the "let's do this and get home to my sweetie" mode throughout the whole story. It wasn't so much a soul-wandering to find himself and discover his inner soul as it was to do a job he promised to and come home safe (even though her got killed once during the adventure).

On the other hand, James Robinson might be guilty of what you say, in that Jack's space adventures were mainly a way to guest-star a bucketload of DC's space characters and appeal to us fanbulls. Hey look, it's Space Cabbie! And the Legion! And Zorkko! And Adam Strange! And the other Staman! And the other other Starman! It was, to me, the space equivalent of The Books of Magic's trip for Tim Hunter--not so much filler since it told a progressive story, but more a self-indulgence on the act of the writer gearing a plot to the hardcore fans.

Gotta agree with the bovine. The individual character's specific stated motivation matters remarkably little; as a narrative device, a space idyll is a space idyll, and it has one purpose -- to provide the writer an excuse to step far, far away from the hero's defining characteristics and take a breather.

Whether it's filler or not depends on the writer. And if the hero's defining characteristics include an annoying propensity toward navel-gazing. Hal Jordan was exiled from Earth at one point when he was at his most unbearably introspective -- so the resulting space arc actually came as kind of a relief. And I certainly found the Swamp Thing space arc inventive and enjoyable.

But Firestorm also headed off to be one with the cosmos at some point before, during or after the Russian cosmonaut/fire elemental weirdness and that was so bad that even in space they could hear me screaming.

The real question: Which is worse: being sent off into space or being sent into a Sword and Sorcery realm?

(And what of the poor souls who have to do both at the same time? [cough that sounds suspiciously like 'Planet Hulk'])

Points missed across the board in favor of "continuiy knowledge."

I agree, especially about the Superman: Exile storyline, but I'll continue reading diversions into outer space, or indeed a swords-and-sorcery world because I still think the possibilities afforded by either setting are incredible. It's called Failing To Learn From Past Disasters, and is an essential attribute for anyone involved with comics, whether as a consumer, a creator or a character.

I'll have to take exception to the Green Lantern. Green Lantern has a long hsitory of space, and can have a huge supporting cast out there.

Kyle works well in space, better than on Earth. And it's not like that pitiful Raab run was the first space-trip he'd taken.

I think they got the right idea at the moment, with sticking him out in space with a bunch of GLs. That way we get a steady cast and space adventure. I hope they keep him out there!

Another hero who works well in space. Adam Strange.

His Mini showed him flying through space is pretty damn cool.

But you hate Rann so I don't expect you to agree.

I have to agree with both Ragnell and Bully. The Green Lanterns are *meant* to be in space, they're an intergalactic police force consisting of all sorts of alien races.

And Jack Knight is just awesome regardless.

But yeah, I really don't see any real reason for Clark or Diana to go out into space.

The Green Lantern Corps should have space adventures. When you think "cosmic" Rayner ain't coming to mind.

The was no Corps for most of Rayner's tenure so I tend to think of Rayner as a more Earth-rooted superhero.

I tend to concur. I prefer Kyle on Earth, myself. But guys like Guy and John I think can pull it off. And Hal to an extent.

"a Sword and Sorcery realm?"

S&S is worse than space because when they get sent into space, you just have to WAIT. They come back, then everything that happened in space can be forgotten. The S&S stuff can stink up the character forever.

Space idylls are like swimming the sea; you'll dry off soon enough. S&S is like falling in the mud.

Yeah, I immediately thought back to Swamp Thing at the end of this post, and how much I enjoyed his space adventure. I really think it's the reason for space travel that makes the difference. When the hero's out for a specific purpose, or against his will, then it tends to be a more straightforward "getting back home" story, with the incidental soul searching along the way. When the hero goes into space to find himself, it meanders until he has an epiphany, then he makes his way back home. There's a big U-turn in the latter books that the former books don't have or need.