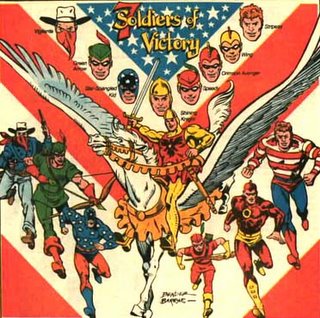 Again, we are living in a Golden Age, ladies and gentlemen.

We live in this beautiful Golden Age where everything matters. Jonah Hex matters. The Blue Beetle matters. For the first time in a very long time, Superman matters.

In the "B.S. Era" (Before Scip), when hiring someone, in order to weed out the riff-raff, I used to joke. "Anyone knows who all Seven Soldiers of Victory are, has a job for life."

I am proud and perplexed to say that because of Justice League Unlimited cartoon, my 5-year old nephew could work in a comic book store. A twelve year old girl can read Grant Morrison's "7 Soldiers" and work here for life. Because of The DC Encyclopedia, I could be fired from my own job. Last year, I learned that there was an all-new Seven Soldiers of Victory comprised of Batgirl, Mento, Metamorpho, Adam Strange, Blackhawk, The Atomic Knight and Deadman!

My question to you, readers of "Seven Hells!" is this...

"When and more importantly, why did this happen?" Please help keep me from firing myself.

Comments:
Okay, so if they're the seven soldiers of victory, why are there eight of them?

So why in the picture is everyone drawn twice with the exception of "Wing". All he gets is a floating head while everyone else gets a floating head and a picture of running? Was there not enough space in the Seven Soldiers Mobile when they loaded up to go pose for this cover.

Can't you just see Shining Night saying, "Oooh, sorry Wing man there are just seven seats. I mean we are the seven soldiers after all. Seven seats, seven soliders it kind of works. But we got this headshot of you, you'll totally be in on the cover." He then shoots him the thumbs up and they drive off. Then just as the tears start to blur his vision wing looks up and sees Speedy, Roy Harper that little punk, flipping him the bird and laughing out the back window

That second Seven Soldiers comes from, I believe, the Silver Age fifth-week event from a few years back.

If they didn't debut there, they at least had a special devoted to them.

I hate to say it but back then Asian characters weren't thought of as "full" characters.

Look at The Blackhawks' "Chop-Chop."

The less said the better.

Wing didn't count in the original SSOV, for whatever reason. The Post-Crisis SSOV deleted Green Arrow and Speedy, and added Wing (finally) and Vigilante's pal Stuff.

Word verification: szpzbwo, which is the sound Green Arrow's bowstring makes as he zips off another whistling yellow cat arrow (or whatever).

It happened in this thing:

Man, that was a beautiful logo. You don't get logos like that these days.

And the beauty of your Seven Soldiers hiring test?

Donald Trump? You're fired. You schmuck.

I'm trying to work out the logistics of the fifth-week Seven Soldiers in my head, and I can't recall: they were called the Seven Soldiers, right? But they had Atomic Knight: generic marine, given suit of armor, which he wrecks. And Blackhawk, who's supercool, but by any means of reckoning would've been Grandpa Simpson by then.
And Deadman, who you can't see. I suppose everytime someone pointed it out, that there were only six, Deadman could possess them and leave them in a dumpster...
I have to look it up now, because I remember Batgirl being all kinds of professional on that one. But "Wing" and "Stuff" make "Kid Not-So-Vicious" seem like a brilliant sidekick name.

I am going to assume Wing didn't get drawn in the full picture since he was the only dead one when that issue of who's who came out.

Actually, I think the JLA comic that covered that (where they all travel through time to rescue the Seven Soldiers, minus Wing) had the JLAer's confused that they had rescued 7 people, but they still hadn't figured out which of them had died.

Isn't the refrain of the JLA/JSA/7SV crossover, "Wait --who are the Seven Soldiers of Victory?" Since they've been exiled from the timestream, nobody can retain awareness of who they are for more than a couple of seconds, right? Kind of like Michael Dukakis. Which makes it a big challenge for the JLA and JSA to rescue them.

So I'd've been out of a chance at a job, since I'd automatically respond with that line . . .