Because Of You, We're All Taking Golden Showers, Vol. 2

Legend has it that in the 80's and 90's, a DC Comics editor hated The JSA's existence. His rationale seemed to be "Why'd we go through all the trouble of cleaning up The DCU with "Crisis On Infinite Earths" if all we're going to do is keep The Golden Age characters in play?"

Today, fueled by a newfound discovery of love for comics tradition, The JSA stands as one of DC Comics best-selling titles, proving that the best concepts are timeless.

Again, that wasn't always the way of thinking. Somehow amidst the holofoil, among the mutants and under the radar, The Justice Society of America made their triumphant return from an editorially mandated limbo...

Justice Society of America was released in 1992 written by Len Strazewski and drawn by the late and truly missed Mike Parobeck . Parobeck's line was truly sublime in its' simplicity and years ahead of its' time. I maintain that if he were alive today, he would be one of comics' most sought after artists working with the likes of Grant Morrison or Greg Rucka. His style was light exactly where darkness was needed.

Strazewski's JSoA was a breath of fresh air in the stagnant comics market. Strazewski was doing unheard of things like getting his voice out of the way, letting the characters speak for themselves. In Strazewski's JSoA, we found a team of men trying to find their way in a world where they were deemed unecessary.

In the first issue, they meet "the future" head-on...

...and "the future" can't compete with a man used to humbling his oppenents through the use of a green, flaming hockey stick... 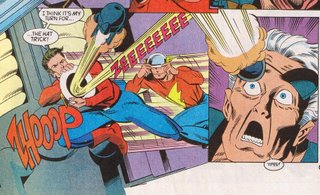 ...and his best friend who deflects rocket-propelled grenades with his hat... 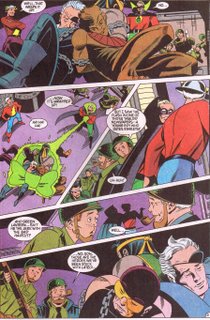 There was a time when the good guys made looking like a good guy seem fun and easy. In the 90's, not so much so. Strazewski and Parobeck's Justice Society of America honored those times while gently racing towards the future. 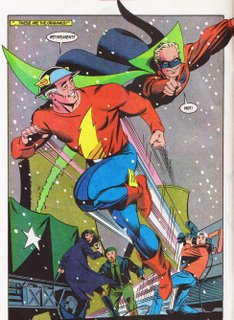 I love how Parobeck has The Green Lantern and The Flash breaking the panel's borders. It subconsciously renders them larger than life and almost uncontainable. His work truly should be studied by anyone wanting to become a comic book artist. 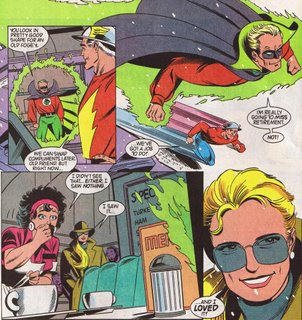 In the last panel, Jesse Quick sums up, perfectly, my feelings on Strazewski and Parobeck's 10-issue run on JSoA: "I saw it... and I loved it."

Well, didn't you know that at one time Jesse Quick was a member in good standing of The Justice Society?

That is a story for a different day.

Comments:
I would say that probably 60% of the pencil sketches I turned out when I was 16 (in 1992) were direct swiptes from Parobeck's JSA book. He was incredible.

I'd never consider getting rid of my floppies of this great short-run DC series.

Great post! I'm going to have to hund down these issues for the hockey jokes alone.

I loved Parobeck's work and started following him when he did The Fly for !mpact and I bought The Elongated Man miniseries for his art alone. It was sort of cartoony, but it had a realistic dimension to it. You could tell the guys who were supposed to be big apart from those who were supposed to be on the trim side. And I always thought that the JSoA series was just selling out before I could get to them. I'll have to check to see which issues I'm missing.
There was just something about seeing these old guys, hitting seventy, and still fighting the fight and doing it well, except for Al (the heart always catches up to you). At least now I know that someone else liked Parobeck's great style. He is missed.

JSoA was one of the best comics of the early 90's. I anticipated every issue, and made sure to make it to the comic book store on Wednesday (I think it was Wednesdays then) every week that I expected it to be there.

So, of course, it was cancelled in under a year. Bah!

Anyway, Parobeck could do no wrong in my book. I still think he's one of the best artists comics have ever seen.

Love the 1992 Justice Society series (or at least the half I've read). As much as I like the current legacy-fueled team, it's great to see a team made up almost entirely of senior citizens. I'd love to see where they would have gone with that concept.

I loved that issue where Alan & Jay's wives kick them out.

Johnny Quick as Jack LaLanne is probably my all-time favorite use of the character.

I picked up two issues of this series way back when, and got my first introduction to the JSA, Ultra-Humanite, and Jesse Quick, the daughter of a character I'd met and enjoyed in some of my mom's old comics.

A few weeks back, I managed to pick up the whole run, along with the eight-issue Strazewski maxi-series that preceded it. I haven't read the maxi yet, but I couldn't put the regular series down. It's just plain good stuff; I wish the current JSA were this well-written and drawn.

Mike Parobeck is sorely missed. His style was ahead of its time, and he was gone long before his.

As one of the lucky fools who bought this when it came out, I remember thinking three things: "this is the best dang comic out there," "more comics should be like this," and "hey, what do you mean it's been cancelled?"

Holy crap, I just realized I have something by Parobeck sitting on my nightstand. He drew the comic adaptation of Batman: Mask of the Phantasm. Which is, needless to say, sweet.

Thinly-veiled cable mockeries are always welcome, and the eye-patch turning out to be a pathetic affectation is nice touch.

That's "Cable" the Marvel character of course, not "basic cable" or any random thick cord lying around (gosh that was a dumb name for a character).

Heh. If everyone who loves this series actually had bought a copy or two, it might still've been running. It's kinda like Green Lantern--the whole reason why they introduced Kyle and turned Hal wacko was because no one was reading the damn book. :)

It's "fair weather fandom." People claim to be such huge idols of whatever the hot obscure title was ten years ago, but no one puts the money on the register.

On a slightly related note, I'm reading the current JSA by Levitz and am struck by how boring it is. There's absolutely no indication that "Infinite Crisis" affected the book in any way. It's been two issues of them getting sonned by Jim Craddock--the wrong one, I might add. :) I just want to bring this up the next time someone complains about a decompressed Bendis or Ellis arc. ;)

martin wrote: "Heh. If everyone who loves this series actually had bought a copy or two, it might still've been running"

That's silly. You'd have a point if there were ten thousand comments here all lauding JSA. I doubt a dozen or less admirers who comment on a blog would be enough to change the minds of DC management.

Look at it this way: JSA is back and going strong, and all of the Liefeldian followers have migrated to greener, less distorted pastures. I'd say that's a win in the end. ;)

*raises hand* I bought every issue of that JSA series as it came out. It's one of the few post-1985 series I've kept in my recent comics purges.

As I remember, sales were decent. The reason for the cancellation was pure old editorial mandate. DC decided that "no one wants to buy comics about senior citizen superheroes" and pulled the rug out from under it. I first got word that the book was being canned when #4 was going on sale. That's hardly enough time to gauge your audience.

Oh, but I agree that there can be a "me too" attitude at times on the 'net.

Thanks for all the nice remarks. While I'm not really doing comics anymore, I am working on a handful of original stories and characters that I will self-publish next year or so. It's part of my sabbatical from my job as a journalism professor at Columbia College Chicago. I miss Parobeck, too and really wish he were alive to draw some of the new stuff.

Thanks for this blog post. I'm a huge fan of Mike Parobeck, and I loved the JSA maxiseries and short-lived ongoing series. I was really upset to realize lately that I didn't actually have a complete run of the Strazewski/Parobeck JSA as I'd thought.

No, Mr. Strazewski, thank you. I'm really looking to reading your future work.