Dogwelder with a Kryptonite blowtorch or... 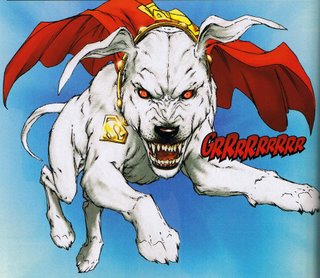 Comments:
Krypto is a dog with all of Superman's powers.

Attack dogs are already hugely dangerous killing machines. If it's a Kryptonian one? You're focked. No doubt.

Krypto has heat vision, which has a much longer range than a Kryptonite blow torch.

Ultimately, Krypto. The wielder of the blowtorch wouldn't die from the inevitable mauling itself, but would contract Super Rabies, for which there is no vaccine and no cure.

Krypto is just a carrier, of course, and is not affected by the contagion.

(No, I have no idea what I'm talking about.)

Before or after Krypto has been kicked down the road by Superboy-Prime?

Then we'd ALL win!

Kryptonite blowtorch? What an absurd concept!

Kryptonian dog rocketed into space getting superpowers from a yellow sun? All the way!!!

Krypto is the greatest remnant of that long forgot planet Krypton!

(As long as he doesn't have word-based thought balloons like he did in the Silver Age!)

You know who would win that fight?

As a former dog walker, I have to be honest and say that Krypto's performance in said duel would depend greatly on his motivations. Post-Infinite Crisis Krypto would be down in the dumps after losing his friend, Conner, and would most likely just roll over and die. However, if Robin successfully clones Conner and Conner's life THEN became endangered by the kryptonite blowtorch, I can honestly say that there would be no stopping him and he would most likely super-hump his enemy's leg, causing tidal waves and an inability to weild the kryptonite blowtorch. Then Conner, as a good law abiding citizen, would use a plastic bag to dispose of Krypto's super-poo.

I love you all.

Krypto is the greatest comic book character ever! He kicks - or maybe the word should be bites - anyone's ass.

Remember "Whatever Happened to the Man of Tomorrow?" The kryptonite man turns Krypto green and kills him- and that doesn't stop him! Krypto wins.

That said, I'll buy any comic with Section 8 ever.