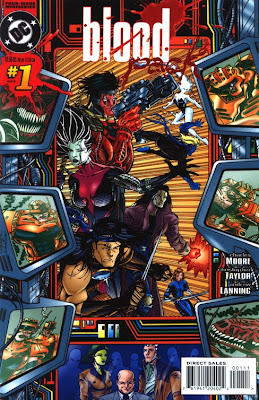 Continuing our look at DC's biggest "event" crossover, It's "Crisis Of Infinite Births II" or "How I Learned To Stop Worrying And Love The 90's."

WAR OF THE GODS:

DC did make a half-assed attempt at truly integrating Son of Vulcan into The DCU. Most people were impressed that a man could be in the vicinity of Lobo while wearing a skirt and come out the other side unscathed.

Circe moved up in Wonder Woman's villain pantheon by trying to take over the world.

Umm... I really don't think it did anything other than sport George Perez covers.

Hitman! A hard-drinkin' assassin with a heart of gold.

Or as I like to call him: an Irishman.

Pretty much all of it. Loose Cannon? Imagine (or don't) Lobo being molested by a Smurf, this is what you'd expect from that most unholy of couplings. I'm pretty sure his creator, Jeph Loeb ain't sitting around waiting around on royalty checks from this one.

The return of The Justice Society of America from comics limbo.

Jack Knight, Starman. Writer James Robinson introduced in Starman a comic that honored DC's Golden and Silver Ages while simultaneously forging it a new and glorious future. Without this book there would probably be no Justice Society of America, as we know it.

Starman also presented us with the concept of the "legacy character," a character building upon the name and legend of a previously introduced hero.

He later passed on the torch and Cosmic Rod of Starman to Stargirl, a character prominently featured in the monthly Justice Society of America series.

In trying to fix Hawkman's origin, it did more harm than good.

Neron, a character whose machinations have tied him to the fates of both Blue Devil and Ralph Dibny, The Elongated Man.

Established Major Disaster as something of a bad-ass. Disaster joined the side of the angels and became a member of The Justice League.

Effed up The Killer Moth.

I mean, really effed up The Killer Moth.

Personally, it made me like The Legion of Superheroes a bit, especially Ferro Lad. I never cared for them before so, I guess...

Hal Jordan (as Parallax) sacrifices himself for the greater good. The 90's officially come to an end.

The Legionnaire that got left behind?

Phil Collins must have had somthing to do with this because it sucked. The writing was weak and unfocused and couldn't maintain the beat.

Led Zeppelin hated it so much they refused to let it be released in trade.

It allowed me to make that joke.

Especially the late, lamented Hourman who went on to have his own series and became a member of The JSA.

There will be a DCU a million years from now. In a metatext sort of way, that makes me kinda happy.

The Sentinels of Magic. I kinda liked these guys. They should have called it Primal Force, though. Sales would have gone through the roof.

Oh, wait. That wouldn't have helped.

Hal Jordan as The Spectre. Come on, this guy tries to pay strippers with a check. Is this the guy you want deciding your fate or running Cincinnati?

So, again, I ask you, "Which "event" had the longest lasting character contribution(s) to The DCU?

Comments:
Lord, I don't even remember "Genesis"!
You forgot Hourman 1,000,000. I thought he was a cool character. Keep the posts coming! They're fun.
WM

Zero Hour did not bring the JSA back from limbo. In fact, it had them disband for no good reason after Extant aged them nearly to death and killed The Atom and Hourman.

Armageddon: Inferno had brought them back 2 years earlier.

Also, Zero Hour is not good in any way. Nonsensical plotting, sub-laughable dialogue. It's like death to my eyes.

DC One Million was one of the most imaginative and wonderful of the cross-overs I had seen up to that point. I think the only problem was that aside from Grant Morrison none of the other writers did the concept of ONE MILLION years in the future any justice. They tried...but only Morrison truly understood just how far away it was. But the conversation that Starman 1M had with Jack Knight was a great moment.

Plus the Martian Manhunter use of tactics. Crazy..but wonderful....

Before Zero Hour, other than their cancelled series, not much had been heard from them.

Geez, how could I have forgotten that!

I have to vote for Underworld for best crossover because it revitalized a lot of troubled villains like Dr. Polaris, Metallo, Blockbuster, and most notably Lex Luthor. Lex had messed himself up bad by faking his death and revitalizing himself in the body of a clone and Neron made him healthy again.

There's also a wonderful moment with Captain Marvel being the hero, and the beauty of when the Joker reveals that he sold his soul for a box of cigars.

Thank you, Devon; that was a very educational retrospective!

"Which "event" had the longest lasting character contribution(s) to The DCU?"

Along with what was written already:

It aged enough of the JSA that the golden age heroes couldn't be the whole team anymore.

Hal Jordan's role in it is still causing him problems.

It led to the first reboot of the Legion of Super-Heroes.

Love it or hate it, a lot of things Zero Hour did are still being used/fixed today.

It fiddled with some of super powers and after it was done, the powers were back to normal.

Congratulation, John Byrne, you crated an "event" that accomplished nothing.

Most significantly (or I guess, least significantly) Ayla's power change to her "Light Lass" powers (which lasted, I think 4-5 months, tops) and Darkseid being in the Source Wall (again, lasting a very short amount of time, less if you count his appearance in "Rock of Ages").

Yeah, okay. Back from comics limbo. Fair enough, except that after Zero Hour they weren't seen much again until "Crisis Times Five" and the relaunch of their book in 1999.

One million months, starting from June 1938.

I actually rather liked Zero Hour. Hal was crazy, and Guy Gardner was in it. AND it brought back Lady Blackhawk, and I just loves me some Zinda. It also killed off Kari Limbo, which is a very good thing.

I liked Final Night too, at least Hal got redeemed a tiny little bit.

You forgot the Millenium Giants crossover.

Ushering the end of the "Electric Superman" era.

The lack of a good explanation for why Electro-Supes turned back into Classic Supes.

Pretty much everything else.

Sally, I actually had a crush on Kari Limbo at one point.

God, I was so fucking stupid back then.

I'd argue that Mark Waid was already doing the legacy character thing in the Flash, especially after Jay Garrick came back. There was a real "family" feel to the book and for the first time I got the sense that DC had a richer history, overall, than Marvel.

And I don't know if Zero Hour pulled the JSA out of comic limbo. It seemed from comments at the time that Dan Jurgens and crew were trying to put those characters to bed. It was only after Starman developed something of a following that the JSA really had the chance to come back, and even that took like four or five years.

Zero Hour's bad included the unfortunate precedent of rebooting the Legion of Super-Heroes (which was rebooted again for no good reason after Infinite Crisis).

Of course, if the Legion hadn't gotten so fucked up from the Giffen/Bierbaum "Five Years Later" run, they wouldn't have needed to reboot it in the first place.