Sketch-A-Palooza begins anew and this time with.... 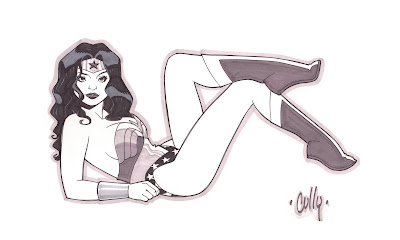 Wonder Woman as rendered by Cully "Black?" Hamner!
Now, I have no idea why Wonder Woman is reclining in such a way. I know, it's not very "warrior-like," but dammit, it is soooooo pretty!

If I wrote anything that Wonder Woman were in this is exactly how I would introduce her. Reclining inexplicably, looking right into "the camera."

Wonder Woman (Gliding on an air current) : Well, it is Tuesday...

By the way, the new Big Monkey Podcast is up, up and away...

Thrill to the Deaths of The New (Podcasting) Gods!

Comments:
Podcast was really good this week. I've gotta say that Mike Pellegrino is GREAT. You've got to keep him or have him guest a little more often. He hits the points on the head and gets a lot of what goes on.

"Wonder Woman (Gliding on an air current) : Well, it is Tuesday..."

THAT mad me laugh out loud.