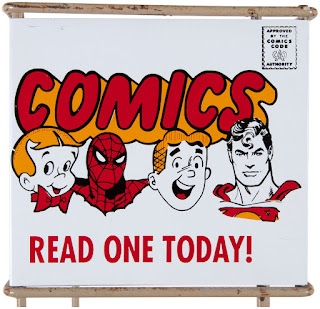 Comments:
Same here -- I used to ride my bike to the drug store and pick up whatever oddball comics they were selling. They'd have years-old "Batman Family" comics sitting there for no discernible reason, but what the hell, it opened me up to material I never would have encountered otherwise. Did you know that there used to be a guy drawing Batman with the name "Dick Sprang"? The things I discovered at Fox Drugs!

But that was the early 80s. In recent years, I can't think of a single place near me that sold comics other than the comics shop, so the newsstand wasn't even an option. That said, I do love my comic book shop and would hate to not offer them my loyalty, so it's a trade-off.

The entire business model is changing, isn't it? Now it's movies drumming up interest in comics, which makes me think it's time for anthology comics again. Like, instead of "Batman Family", these days the hottest commodity at Marvel would be centered on Black Panther and the people in his orbit. At DC ... um, Wonder Woman and friends? Use the anthology format to get people buying the comic for the lead character, but then they can learn more about the comics universe in question. Worked for me!

Bring back the anthologies and digests!

I know they don't really sell them in grocery stores like they used to but sell them in comics shops. I'm more surprised they don't sell them in airport and train stations. When I did comics retail, we had racks full of $1 comics that parents would snatch up for their kids for long train rides. I found my first comic in a bus station on my way to a family reunion.

Cheap paper and reprints; each one should have issues featuring their top characters and not so top characters. Reprint first appearances and one-off stories and tell readers where you can find them in current continuity. Treat these comics sort of like their the maps in a treasure hunt and let them find out just how great comics can be.