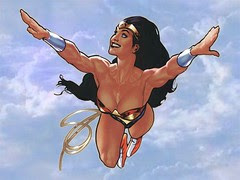 My Muse.
Originally uploaded by Devon Sanders.
As you may or may not know, I run a comic book shop. There's a void in comics that needs filling on my comic racks and DC Comics isn't meeting it. I need a "kid's comic" in the vein of Justice League Unlimited, aimed at young female readers. Specifically, one featuring Wonder Woman.

When Wonder Woman was created, she filled a void. 1941, the editors at DC Comics noticed something strange going on: little girls were reading their brothers comic books. For lack of something better, they read whatever their brothers had. If little girls ever saw a woman in a comic, she was either falling out of a window or seducing some curiously celibate yet intrepid hero. Not a lot of role models to choose from. Enter DC Comics to give them someone to look up to: Wonder Woman.

The current Wonder Woman comic, while great, ain't much in the way of kid-friendly. It's not a weird thing to see her suit up in battle armor, blind herself with snake venom and chop off Medusa's head and you know what? She should. Since DC's post "Crisis" re-imagining of her, that's what she does but her original target audience has been left behind.

What I propose is simple, really. A comic done in an animated style focusing on a "tween" Princess Diana's adventures. Bad hair days and bad Ares days, all. Include back-up stories featuring a young Zatanna, on the road with her father, solving mysteries all Nancy Drew-like. Fill it out with solo tales of Starfire and Raven of The Teen Titans and you've got something there.

I don't think the answer's a Tiny Toon approach to the DCU.

An ongoing Wonder Woman book set in the Animated Universe is all we need.

Even, dare I broach it: Wonder WoManga.

Serious, if slightly controversial question: how much of your point would be addressed if Colleen Doran, Gail Simone or Trina Robbins were writing Wonder Woman today?

Get Jill Thompson behind a title like that, and I'd be there.

I'd be unspeakably happy to see a for-girls title that didn't center around faeries, princesses (with Wonder Woman being the obvious exception), or spy-gadgets based on makeup.

I would buy that!

Or maybe they could do it using Wonder Girl?

I read the most marvelous comic book at Devon's store. It was aimed at children and had Wonder Woman helping people understand why the rainforests need to be protected. By description, it sounds horrible sappy, I know, but it didn't read that way.

And my first thought (as I wiped away a nascent tear!) was, "Why aren't there more comic books like this?"

There just may be a comic done too. Ya never know but the precedent is there already.

what a wonderful idea! i'd back you, or them one hundred %! now if only the right person will listen.