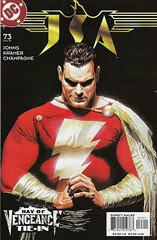 JSA #73
Originally uploaded by Devon Sanders.
With everyone losing their minds over DC Comics' new logo, I thought I'd take the time to show a new logo, done right.

JSA's logo does everything right. From the minute I saw it, it blew my mind. I mean, just look at it! It is so beautiful. The semi-Art Deco design, its' placement just above Captain Marvel's head. It doesn't just say, "new logo," it says, "If you didn't know, Alex Ross is now our new cover artist and we'd like you to know it. By the way, Capt. Marvel's re-joined the team, as well."

It also reflects, stylistically, the time period The JSA comes from.

It does everything a great cover should do. It gets your notice, it tells you what's inside of the comic and most importantly, to this retailer, it sells comics.

As of this morning, JSA #73 totally sold out at my store, necessitating a re-order.

Covers STILL do sell comics. Even without a monkey.

Comments:
From the AICN review of this issue:

"I do believe [the next Blue Beetle] will be a woman. And I think she'll have ties to the JSA. That's all I'm sayin' right now though."

Devon -- what are your thoughts? Have you heard similar scuttlings?

I don't much believe that tho' I've been wrong on many occasions. Maybe this is why that revier thinks the new Beetle will be a woman.

Quoting Beetle from "Countown To Infinite Crisis."I am the second man to call himself The Blue Beetle. I tell myself there will be a third. And I hope whoever he or SHE may be, they do better at it than I have."

I think it's a throw-away line, myself.

But if it's something more than idle spec, who would it be?

A woman with ties to JSA...

Kendra Saunders (would tie in with the vaguely Egyptian motif?)

Think about it. Her backstory is in desperate need for some cleaning up and Johns-ing, and it'd link her even closer to her hubby....