Number Two Of The Seven Deadly Signs Of Villainy 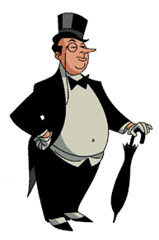 Penguin
Originally uploaded by Devon Sanders.
Would you look at THIS smug monocle, wearing bastard! Yes, the wearing of a monocle is considered one of The Seven Deadlies. Ask yourself when was the last time a man wearing a monocle ever brought you a pie?

Has The Penguin ever offered to pet-sit for Killer Moth? NO! He hasn't! Monocle wearers are usually too damned self-absorbed to give a damn. Want other examples? Gentleman Ghost. A monocled, top hat wearing ghost! Dead and STILL sweating his wardrobe.

DC Comics believes the monocle such an instrument of evil that they even NAMED one of their villains THE MONOCLE! Now, that's gangsta! His schtick? He wore a monocle that shot laser beams. Gangsta! 50 Cent wants one of these.

Only, I'm sure he would like to meet The Monocle's fate. He died after Manhunter shoved a pole through his monocle, causing his head to blow up. Why'd she do it? She knows evil when she sees it.

Comments:
And Vermin Vundabar. And just about any Nazi officer.

But, in the golden age, a monocle also (and perhaps more directly) stood for wealth/Britishness.

If you saw a panel with a guy wearing a monocle, you could be nearly certain he also had a woolly mustache and a jacket full of the cross-hatches that's comic book shorthand for "tweed."

And it's also a safe bet that he'd be looking at something increduously (through the monocle) and saying some variation of the following:

Now that I think of it, no bald has ever brought me a pie or pet-sat for me.