The Seven Deadly Signs Of Villainy! 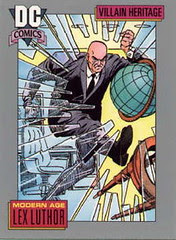 Luthor
Originally uploaded by Devon Sanders.
Presenting number one of THE 7 DEADLY SIGNS OF VILLAINY.

Take Lex Luthor for example. You know he's evil because he's bald AND throwing a temper tantrum. He's kicking the antique globe his employees gave him for Kwanzaa.

Comments:
Hey! What happened to my impassioned and eloquent defense of baldness?

Well, here's the nub of the gist:

"Anonymous," I lost the Lex picture somehow last night and re-posted it minus the comments. P.S. I'm bald, as well and freely admit that I am evil.

But, but, but what about Professor X? And Steel? And Moondragon? And the Watcher? And Captain Picard? And, um, Roadblock from GI Joe?

And J'onn J'onzz and Deadman and Sardath and the Guardians of the frickin' Universe (we're talking surface area, here, not complete glabrousness) and JLU Green Lantern and King Mob and Green Arrow (he has, you'll recall, a bald spot) and Thunderlord and Hooded Justice and ....

"Unknown" You seem to be becoming annoyed. Are you becoming...evil?