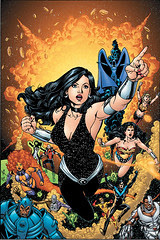 Donna Troy, ummmm...cleavage. If I wasn't before, NOW I'm really looking forward to this one.

Comments:
Serious question -- is that a G on her belt buckle?

You know, what with the new dress cut to flatter her dinners,

And the fact that she's being written by Jimenez,

I think I've sussed out her new identity:

If SHE doesn't use Glamazon as her codename, then by Tartarus I WILL!

I received, to date, 129 email message from the Gay League of America on the subject of Donna's hair and outfit.

*sigh* Sometimes it's embarrassing to be gay...

You shan't be seeing me comment on her clothing Mr. Scipio... but hopefully they'll give her a husband back and maybe a kid again and make her the real character she used to me.

I swear Donna had more realism to her life in the old Titans book of the 80s. Nobody came close.

Now? She could come back as the new Blue Beetle for DC's sake!

Oh. And her belt buckle is in the shape of New Chronus, the home of the Titans from the "Who is Wonder Girl?" storyline back in the day.

At least that's what I always felt it was supposed to be since it was just like the planetoid they were on.

Or was it a crescent moon? I can't remember. I've grown too old and did way to many drugs in my younger days.

Never mind her effin' belt buckle! Look at her BOOBS!

Well that's a given. Jimenez has a strange mad-on for Donna Troy.