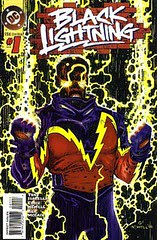 Black Lightning
Originally uploaded by Devon Sanders.
Would you pay $2.50 to read the exploits of Black Lightning? How about The Red Tornado? Are you simply happy seeing them guest star in other characters' title?

If you're a DC Comics fan, more than likely you have a "guilty pleasure" hero. A character you know will probably NEVER headline his or her own title but one that you'd support financially just to keep it in print.

Who would my character be? I used to think it would be The Creeper but in the wake of a lackluster 90's series and a dumbfounding Vertigo-izing of the character concept last year, I'm just not so sure anymore. These days, I find myself practiacally wanting to give my eyeteeth for a Question series more in the vein of The Question of "Justice League Unlimited."

So, my question to you is this: Which character is your poison of choice? Answer as you see fit.

Comments:
I'd pay good money for continuation of the All-Star Squadron by Roy Thomas and Jerry Ordway, letting them finish it until World War II ended.

I was a kid when I started reading All-Star Squadron and it forever altered the characters I would grow to love. Even as a kids I preferred the Earth-2 characters to the mainstream Earth-1.

Funny. I still do today too.

Well, Vibe and Black Condor, of course! But they are dead, and I assume you mean characters that are alive but in limbo.

Y'know, I just bought All-Star Squadron 1-4 last month after having not having read them for nearly 20 years. I think I'm going to write about that soon.

I'd like to see Doctor Occult and Doctor Thirteen team up Odd Couple-style to investigate/battle supernatural goings on in the DCU.

I'd love to see an ongoing Phantom Stranger book again...

Just about any of The Charlton heroes.

Yes, most definitely The Atom. Also, if the Question were more like his cartoon counterpart (and with an occasional Huntress guest star), I would support that book with my last $2.99.

What IS it with you and Punch & Jewellee, DVS?

" I used to think it would be The Creeper but in the wake of a lackluster 90's series and a dumbfounding Vertigo-izing of the character concept last year, I'm just not so sure anymore."

wow. that is exactly how i feel about the creeper, too. seriously. those series were bad.

Scip, you HAVE love the idea of married supervillains who bring their kid along on a job if they can't get a sitter.