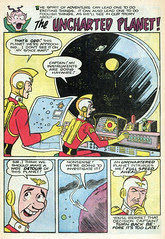 Why Rann Will Lose.
Originally uploaded by Devon Sanders.
What you're witnessing is the final adventure of Rann's greatest explorers, D'p and S'htz. After failing to ignore the warnings of the off-panel narrator, they crash landed on "The Unchartered Planet" of THANAGAR, which in all actuality was quite well known in galactic circles. The Rannians were too wrapped up in trying to reverse their little erectile dysfunction problem to actually practice things like astronomy and such.

Well, upon landing on THANAGAR, they were welcomed with open arms but quickly wore out their welcome with their insane obsession with touching Hawkwoman's spear and giggling like schoolgirls.

They have not been seen since. If found, please contact Adam Strange c/o Robby Reed at "Dial "B" For Blog."

Comments:
This comment has been removed by a blog administrator.