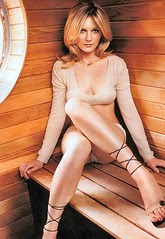 Kirsten Dunst
Originally uploaded by Devon Sanders.
Sunday, I went to go see "Howl's Moving Castle" and somehow, a friend and I got onto the subject of Kirsten Dunst's acting ability. I once described her acting skills as "having the range of a potato pellet gun."

What's funny is that a guy in front of us knew exactly what I was trying to get across not only about Kirsten Dunst but he knew what a potao pellet gun was! Apparently, it's a guy thing as the women we were with knew nothing of one of God's greatest creations, the potato pellet gun. See, Kirsten Dunst's acting ability CAN bring people together. It only took metaphor and two men's mutual love of the potato pellet gun to make it happen. Kirsten, thanks for making a wonderful night just that much more special.

Comments:
Granted, her acting will never shake the world, but MAN, she is one very atractive woman.

I've always thought she was just great to look at, which is what made her such a good casting call as Mary Jane. As conceived, Mary Jane was meant to be eye candy, and Ms. Dunst certainly fits the bill.

Good gravy! I just posted this pic 30 minutes ago and it's ALREADY one of the most viewed pictures in my photostream.

Okay, I'm a girl and I totally know what a potato pellet gun is.