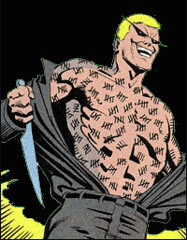 Mr. Zsasz
Originally uploaded by Devon Sanders.
I won't get into going to see Batman Begins and how I'm still all aglow from the effect it had on me. While watching it, I couldn't focus as I watched, in awe, as one of my favorite Batman villains was made flesh on screen. In the film, this villain wasn't used to the effect of The Scarecrow or Ra' al Ghul, but with a simple and effective villain cameo, Batman Begins acknowledges one of comics' better idea-men.

I've always been a Batman fan but in the 80's, I just couldn't seem to get what I wanted. A Joker battle here, a Nocturna battle there. It all pretty much read the same. That is until I read Batman: The Killing Joke. It had something that had been missing from the Batman mythos for years: atmosphere and I wanted more.

Understand, I was aware of things like Batman: The Dark Knight Returns but unfortunately, distance and lack of disposable income, played a part in keeping me away from Batman.That's why, with a price point of 75 cents and an abundance of quality, writer Alan Grant's Detective Comics run will always hold a special place in my heart.

Following an incredible Mike W. Barr/Alan Davis run on 'Tec he started Detective Comics, he started by re-introducing readers to one of Batman's oldest and most normal of rogues, The Crime Doctor. It didn't stop there, this is the man who WAAAAY before Villains United re-introduced The Catman, as a viable threat to Batman and later even introducing us to the family (!) of Clayfaces, The Mudpack.

Here's where we give credit where credit is due: When I was growing up, writers of the Batman mythos didn't even bother to create anything new or lasting.

HUSH? Shhhut the f*ck up.
BANE? ...of my existense.
NOCTURNA? Put me to sleep.

Why should you when you can play with comics' greatest Rogues Gallery? Not since Jerry Robinson or Bill Finger and arguably, creator of Ra's al Ghul and Maxie Zeus, Denny O'Neill, had a writer been so prolific at creating new additions for the Batman's mythos.

Among them Anarky, a 15 year old genius willing to stop at nothing to give Gotham back to the people.

Mr. Zsasz, a psychopathic serial killer who cuts a notch in his skin with every kill in order to relive its' thrill and to "hold onto them" just a while longer .

The Ratcatcher, imprisoned for over a decade, upon release he trains an army of rats and literally brings the men who imprisoned him down to his level: the sewers.

and perhaps, his most enduring legacy, Scarface and his "partner," The Ventriliquist. A murderous crime boss who attempts to run the city using a dummy carved from the old gallows of Gotham, eventually going on to receiving the regard of being added to The Rogues Gallery of "Batman:The Animated Series."

Can you imagine being 15 and reading this stuff? I can and if it weren't for Alan Grant's incredible additions and re-tooling of Batman's Rogues Gallery, I honestly don't think I'd be as big a Batman fan as I am today. To this day, I believe a hero's only as great as the evil he fights. Alan Grant always helped Batman in doing an excellent job of it.

I didn't like all the characters he made, but I appreciated that he TRIED to make new ones as they did in the Golden Age.

And remember, 80 percent of Golden Age villains were crappy and forgotten!