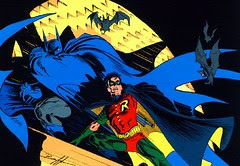 Breyfogle Batman & Robin
Originally uploaded by Devon Sanders.
Yesterday, I spoke of writer Alan Grant's contribution to the Batman mythos. No discussion of Mr. Grant's work would be complete without mention of his Detective Comics/Batman collaborator, artist Norm Breyfogle.

Before Norm Breyfogle, many Batman artists drew Batman as a man who dressed as a bat with the colorists focusing on the blues and grays of his costume. All well and good but after a while, who could truly tell one artist from the other. Breyfogle took a cue from the often-manic energy of Alan Grant's scripts and returned Batman back to a place he'd seemed to have forgotten altogether.

Breyfogle drew a Batman that was more shadow than man. Gone were the prominent blues and grays of The Batman's uniform, returning was the black that helped him melt within shadows. Gone was the barrelchested Batman many of us had grown up with. Breyfogle re-imagined his Batman as all sinewy muscle, reminding one of an Olympic level gymnast or swimmer, an athlete who looked as though he could fistfight The Devil himself. His Batman truly was the stuff nightmares & urban legends were made of.

This was MINDBLOWING to me at the time! Recalling Neal Adams' amazing uses of anatomy, Breyfogle's Batman was a true amalgam of shadow and man, often a blurry black vision of two and three dimensional effect.

Not only did he re-imagine Batman but he created the stunning visuals of the Alan Grant creations, the self-mutilating Mr. Zsasz, the incredible idea of Scarface and The Ventriliquist, the golden visage of Anarky and many more.

What better compliment can I give him than to say that his Batman is MY Batman. Probably always will be. When I think "Batman," his always seems to visit my mind's eye and to this day, I couldn't imagine it any other way.

Comments:
You know, Breyfogle's Batman is probably my favortite rendition, or at least top five, but when I think Batman, I see a Jim Aparo rendition. From his Brave & the Bold run, to his stint on the main book, all the way through Batman & the Outsiders, his Batman has been hardwired into my brain. Interesting point though ,that individual comic fans see specific artist's renditions of characters in their minds. Weird...

Apropos of absolutely nothing, I thought you might enjoy this:

Warren Ellis is a little crazy.

Again this time, with a working link. Sorry about that.