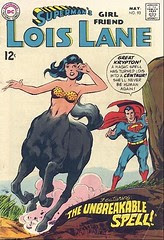 He Always Did Admire Supergirl's Horse.
Originally uploaded by Devon Sanders.
Many things could have precipatated the break-up, among them Superman's newfound interest in Supergirl's horse, Comet.

The superhero community spoke of Superman's "ways" in hushed whispers but it was on a fateful June day that Lois Lane turned up with a horse's ass.

The JLA's resident magician, Zatanna had crossed yet another line.

There was a story where Lois became an entire horse not just a horse's rear.

Anyway I saw a panel from it where she's flying along with Comet by her side and she's "oh, I guess now I'll have to settle for Superhorse instead of Superman!"

She was willing to settle for the horse?!?

I need this comic in my life. I will not rest until it is in my grubby little hands.