A Man Wants What He Wants 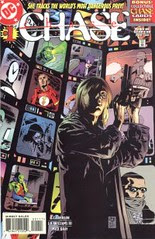 Chase
Originally uploaded by Devon Sanders.
Would you buy a trade paperback of a series written by Mark Millar AND Grant Morrison? A trade that alludes to a secret cabal of villains, led by Lex Luthor, who are, coincidentally, ready to take over the world. What book would that be? A book way ahead of its' time: Aztek.

Would you buy a trade of one of DC Comics' best and arguably most influential comics in recent memory. What book would that be? It would be CHASE.

To my mind, this book about former private detective turned DEO Agent, Cameron Chase, was a precursor to a wave of "crime comics" such as QUEEN & COUNTRY, GOTHAM CENTRAL and POWERS.

Cameron Chase was a piece of work. A woman who's father, The Acro-Bat, was a member of the psychadelic 60's superhero group, The Justice Experience and as a child, she watched her father's throat get ripped out by one of his enemies. traumatized by the experience, she cultivated a great disdain for "powers."

Little does she know that she possess a power of her own.

In its' ten issues, we're introduced to the shadowy Department of Extranormal Affairs and its' director and former member of Infinity Inc.,Mr. Bones. Her first mission? She ordered to shepherd a newly re-formed SUICIDE SQUAD. Subsequent issues have her "team-up" with the likes of The Teen Titans, Booster Gold and Hal Jordan. One of her final missions? Track down the urban legend, The Batman and all rendered by Promethea's J.H. Williams' pencils, to boot?

Sounds good, huh? You can get it in back issues but NOT in trade form. What I propose is that DC starts some kind of "Cancelled Comics Cavalcade" of trades. Cancelled comics that just may have been a bit ahead of their time. Comics that featured talent that hadn't quite "broke" yet, like Geoff Johns' S.T.A.R.S. and Stripe.

DC, let the people know that even when no one was looking, you were publishing some pretty damned good books.

Why don't they come out with trades of the Joker's series in the 1970s, or the original Secret Society of Supervillains?

Those aren't GOOD comics by any means, but they are important nonetheless...

Its a shame that those books only go about 10 issues because it doesn't seem enough for a 'phonebook edition'. MAJOR BUMMER and YOUNG HEROES IN LOVE would be good to see in that form also.

On a mildly unrelated note, it'd be nice to see a collection of Ditko's QUESTION series.

How many copies does a trade have to sell in order to be profitable? Those are all good suggestions (I could probably come up with a bunch more - hey, where's The Minx?), but would only a tiny group of people buy them, hence making them not worth it? I wonder.

I'll tell you what I'd love to see is some of those Denny O'Neill/Denys Cowan Question issues collected. Those comics were unsung heroes of my love for the medium in the mid 80's.

I'm not what it would cost to do something like this but it seems to me that if the print run is kept managable and the costs, low and the demand is there it CAn turn a profit.

I'd add Chronos and Hourman to the list of "killed-before-their-time" books. Oh, and Vext. And DEFINATELY Heckler. I'd buy any of those books in trade the day they were released. Those were really good books.

Nice article on one of my all-time fave comics, Chase.

What? What at you looking at? Shut up!

What? Look, I just want to know if it's really as unfunny as it seemed back then.

Not kidding about this: the JM Demattis Dr. Fate run. Which was all kinds of cuh-razy. Wherein the Mr. and Mrs. Dr. Fate(s) save us from certain destruction by discovering that the entire universe is contained in the smile of real-life new age guru Meher Baba.
You know, that old plot.