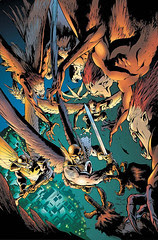 Hawkman #41
Originally uploaded by Devon Sanders.
Just finished a review for Thor's Comic Column and guess which book I reviewed this week?

Can you believe Hawkman #41? Go figure. Here's the first paragraph...

Any guy who repeatedly smacks Green Arrow in the head with a mace is aces in my book. Did mention that’s why I love Hawkman? You’ve gotta love this guy! Who can’t love a guy who’s been reincarnated as a pharaoh, a gunslinger, an archaeologist and an intergalactic space-cop who’s son just happens to be the current Doctor Fate and his also happens to be Daniel, the current King of Dreams, The Sandman. Hell of a family to marry into, huh? A former beat cop from the planet Thanagar, Katar Hol, Hawkman was usually portrayed as The Justice League’s “enforcer,” a role more often than not leading to internal conflict with his fellow Leaguers, especially the sometimes overbearing and oft-times condescending Emerald Archer, Green Arrow. I especially love this character because he’s the character I get compared to most of all. Like the current incarnation of Hawkman, archaeologist Carter Hall, I’ve been known to calmly speak of art and then the next minute, attempt to smack someone in the head with a hammer. (A true story. Sit me down and I’ll tell it to you sometime.) This Wednesday, with Hawkman #41 the adventures of Hawkman come to an end, heralding the one constant in the Hawkman mythos: a new beginning.

Click on the "Thor's Comic Column" link in the "Links" section for the full review later on tonight.