"What The Hell Am I Doing Here? I Don't Belong Here." 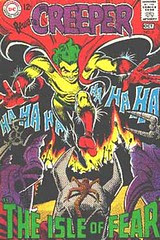 The Creeper
Originally uploaded by Devon Sanders.
I simply ADORE The Creeper. ADORE HIM, but alas, after talking to Scip of "The Absorbascon" fame, I just may have to concede to the fact that The Creeper, as a character, isn't strong enough to carry his own title.

I look into those crazy Creeper eyes and like a mother gazing at her child, see all kinds of potential in one of The DC Universe's least favored of greenheaded stepchildren.

Scip seems to think The Creeper works best as a "guest star" in other people's books. Y'know someone who comes in and livens things up in an A-lister's title, only to escape back to limbo with the next month's Diamond solicitations.

Does something like Grant Morrison's "7 Soldiers of Victory" dispel the notion of the "guest star" or propagate it by placing seven disparate DC characters under one banner?

Are there truly no small parts, just small actors? I'm curious as to what you all think.

Comments:
This is exactly why I miss the old Adventures in the DC Universe comic. Alas, anthologies never sell well, and certainly never sell consistently, issue to issue, but they offer readers and writers a unique opportunity.

They act as a roving spotlight that meanders through the DCU, fixes upon a character for an issue or two, and then moves on. Sure, sometimes it alights upon someone you don't care about, but what better challenge is there for a writer: I'll find something about this guy to hook you.

It's why I like JLU more than I did JL. The obscure characters get a chance to show their stuff -- and I'm not just talking about their powers and costumes. I'm talking about their character -- their outlook, their personality. There's a reason that the Question is different than Superman, and it's more about how he thinks and reacts, not whether or not he's got eye-beams.

Morrison's doing the same thing the Seven Soldiers stuff. And, true to form, he's establishing living, breathing characters (I unironically LIKE Klarion the friggin' Witch Boy!) .... amid a peyote-fueled plot which may or may not ever cohere into something resembling a story.

Having both done a great deal of theater in the past and shared dressing room space with the rest of the male chorus, I can indeed tell you -- There are small actors. :-)

I think anybody can be made into an awesome character. It is a sign of a talented writer if he can crib background players from someone else and make them the star: Rosencrantz and Guildenstern are Dead for example. A lesser example would be John Constantine. In Hellblazer #11 (I think) someone writes in the letters column that they never thought he could hold up his own series--he was just some lame minor character from Swamp Thing. And yet, the man in the trenchcoat prevails.

Ask yourself this. Is it possible that you love a character precisely BECAUSE they are a permanent guest star?

Once a character is the star of a story or title, they get homogenized a bit so that the reader can identify with them. This is really noticeable when someone with his own title guest-stars in someone else's book. As a guest-star they are often more "like themselves" than they are in their own book!

One of the things we like about our favorite guest-stars is that they are a breath of fresh air. Giving them a title would spoil that.

Take the Question. Love that guy. Read his title very faithfully. But don't you find him more interesting as a guest star on JLU? I do.

Yeah, especially when the writers throw in blatant Steve Ditko nods like "A is A" into Question's dialogue. I think one facet of Q's character that really works for me in the JLU context is that the writers there have deliberately made him as psychologically "off" as you'd have to be in order to put on a costume and fight super-powered criminals. And then juxtaposing him with Superman was brilliant, although I did like that ironic bit a few weeks back where Batman had to defend Q to the rest of the core group...

Lack of personality + generic and/ or uninteresting powers = no title for you! See: any Avenger or JLAer or Teen Titan or X-Man or Spider-Man ripoff or "extreme guy" or "bad girl" created after the early '80s

It seems to me that it's almost impossible to launch a successful title (meaning one that lasts more than a couple of years) with a character that's not already part of the comics establishment. Looking at the June DC titles, here are the ones with issue numbers between 30 and 100.

So if the character doesn't live in Gotham or isn't a long-standing member of the Justice League or isn't Vertigo or Tom Strong, then he or she isn't likely to have a series that lasts more than 30 issues.

It would seem that if the Creeper is to support a series, he either needs to guest-star in Batman books for several years first or go Vertigo.

very nice moody drawings with a weird psychedelic film noir angle to the narration. it seemed very promising but could not hold on to interesting ideas to further enhance the Creeper-mythos. made apparent by the fact that after 6 issues, Jack Ryder went on a trip through America (insert guest stars to boost sales and ideas) for research for a new tv-documentary.

still, great narrations, excellent stories. though that 1 000 000 tie-in was kinda crappy ... I would search for it in the back issue bins, shouldn't be too hard.

Did you pick up the JLU comic with The Creeper?

Yes, I did and loved every word of it! THAT is The Creeper I envision in my mind's eye. Once again, the cartoon version's nail it where the comics can't seem to.

My favorite Creeper tale is Brave & Bold #80, a team-up with Batman in which they fought the hideous giant bug-man, the Hellgrammite. It was a ripping good adventure yarn, and Neal Adams did a great job drawing the Creeper.

And that's been about it since. Creeper is a character that everyone seems to love, and nobody knows what to do with. Even Ditko, when he returned to him in the mid 70s, was forgettable.

I liked that 90s series, myself, and I think it was just getting in a groove before the muddled One Million crossover and low sales put an end to it.

The obscure characters get a chance to show their stuff and I'm not just talking about their powers and Costume. I'm talking about their character their outlook, their personality. There's a reason that the Question is different than Superman, and it's more about how he thinks and reacts, not whether or not he's got eye-beams