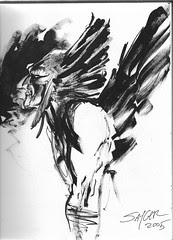 Sayger Hawkman
Originally uploaded by Devon Sanders.
The Hawkman sketch to the right is by a very talented artist and very nice fella, Stuart Sayger. He's done work for Wizard Magazine and Upper Deck "VS." card game series. He wouldn't draw Adam Strange even if you paid him.

Here's what I learned about Wizard World in Philadelphia.

It's a total waste of your time. Wizard, I've learned, doesn't have a spontaneous bone in its' body and virtually overschedules every bit of fun out of their events. Due to their bankrolling the convention they make the artists run around like chickens with their heads cut off, signing at various booths, virtually allowing for no interaction between the artists and the fans.

Saturday's a different story, though. Things loosened up this day and the artists and writers in "Artists' Alley" got to do their thing. I was able do get the beautiful Hawkman sketch to your right, a gorgeous Raggs Morales Wonder Woman sketch. a J.G. Jones Hawkman sketch and a really cool Walt Simonson Spectre.

DC Comics had a great booth with plenty of free stuff for the taking. DC, hands down, had all the starpower at their booth with Rags Morales, Ethan Van Sciver, J.G. Jones, Walt Simonson, Amanda Conner and Phil Noto popping up at differnt times at their booth. People were having a hard time finding them though because Wizard, inexplicably, positioned the 12 foot high Palisades Toys booth directly in front of The DC booth.

Overall, I had a good time, I guess. If, IF I go back next year, Wizard should take a page from Marc Nathan's wonderfully run Baltimore Comic-Con and put comics before its' own name and interests.