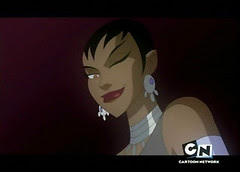 Vixen
Originally uploaded by Devon Sanders.
I was asked a question the other day, "Why doesn't DC Comics have an all-Black superteam?" My immediate answer really surprised me. I said, "I hope THAT doesn't happen." I truly didn't mean for my reply to come across in a snarky manner, but as soon as I thought of an all-Black superhero team, I shuddered thinking of the awful randomness of the 70's superhero team, "The Champions of Los Angeles."

Think DC Comics' "Primal Force" but with even less purpose.

For the uninitiated, "The Champions of Los Angeles" were a Marvel team composed of Black Widow, Hercules, Ghost Rider, Iceman and The Angel. Why were they together seeing as there wasn't much of a common thread running between these characters? Well, I guess Marvel didn't quite know what to do with these charcaters, individually, so they just threw on a team.

I don't want this to happen DC Comics' few Black characters. They've come to mean something to me.

Mr. Terrific leads The JSA, a group nearly seventy years ago he couldn't have joined, much less lead.

Cyborg, nearly a quarter century after his creation, is now leader of The Teen Titans.

To many kids, nowadays, John Stewart is THEIR Green Lantern. To put them in one "room," I think, would diminish them to some degree. I'm not totally against the idea, just as long as it comes with purpose. If something like this were to happen, I'd like to see it just...happen. Something could simply happen to bring about an assemblage of some of comics' brightest (and darkest) stars. If it ever happens, so be it. I'd even support it if it's done right but I do keep this in mind as I run into other Black people on the streets everyday. It just happens. No one's ever called for us to team-up and fight crime or anything. Although, if the need were there, I'd like to think that we would.

With that thought, I warm to the idea of the all-Black superhero team just a little bit more.

Comments:
If such a thing were to happen, I picture it starting as a social gathering. The principal reasons minority or speciality groups (blacks, gays...comic book geeks!) gather are social, not political or "task-oriented".

And, if, at some point, something just happen to happen while they were socializing (like a standard attack by superpowered sword-swinging ninjas in the employ of power-mad would-be world despots collaborating with pitiless alien warrior cultures with improbably advanced technology)...

well, then they'd have to deal with that, wouldn't they?