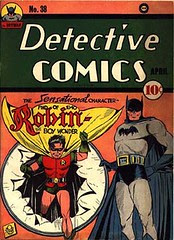 Robin!
Originally uploaded by Devon Sanders.
Last Wednesday, I raised this question to my customers: "Behind DC Comics' "Big Three" of Superman, Wonder Woman and Batman, who's comics' fourth most recognizable character?" Many of the answers weren't surprising and many were kind of enlightening.

Most said Spider-Man and up until a few days ago, that would have been my answer, as well. Others chimed in with The Flash, Capt. America or Aquaman. Many mentioned The Fantastic Four but I sort of discount this with Fox Pictures rightly spending millions in order to keep these characters on people's lips throughout the summer.

With some consideration, my answer is without a doubt, The Sensatonal Character Find of 1940, Robin, The Boy Wonder.

This comes about as the most-asked question by civilians (non-comic readers) who come into my store after seeing "Batman Begins" is, "Where's Robin?"

This answer comes about after watching "Superfriends Vol. 2," realizing the teenaged Robin was a full "Superfriend" while the equally teenaged Zan and Jayna, The Wonder Twins, were left behind to monitor "The Trouble Alert."

It comes as I watch the monthly subscription numbers on the comics, Teen Titans, Teen Titans Go! and Robin comics steadily rise over the past months.

It comes as more kids (like my four year old nephew) recognize Robin more from the cartoon, "Teen Titans" than from as I did, the 60's TV series.

It comes as I lwatch civilians and subscribers alike, eagerly await the July 13th release of "All-Star Batman & Robin." Not just because of "All-Star's" creators-of-note, Jim Lee and Frank Miller but because after 65 years were finally getting a true Batman & Robin comic.

Robin, The Boy Wonder has time and time again, lived up to the proclamation made some 65 years ago.

Comments:
Are you sure Wonder Woman belongs in the top 3 most recognizeable comic characters?

The Wonder Woman tv show was before my time, so if I hadn't read comics, I don't know that I would think her more recognizable, or iconic, than any of the other super-friends I saw on tv as a kid.

Meanwhile Spiderman's had several cartoons and the 2 movies (I also dimly recall seeing his tv show on cable in the mid-80's, which I don't for Wonder Woman). Flash had his own (relatively) recent tv series, even if it was mostly unnoticed. The Hulk had a tv show I definitely remember + a movie. The Xmen obviously have the movies and cartoon.

I'm not saying this to bring down Wonder Woman. While I might call her the 3rd most iconic comic character, I don't think she would reach #3 if you tested the general population.

Now that I think about it, if you showed people a picture of characters and asked them to identify it, I think the population-at-large might recognize the Hulk more than any character after Bats and Supes.

Though, again, he probably would barely place if you limited it to people even younger than me, who probably don't remember the Hulk's show. But Wonder Woman, I believe, would still finish after Robin, Spiderman, and maybe some other characters.

I was going to say what Methane said.

Wonder Woman is more iconic than Spiderman or the Hulk because she's been around the longest. Ask your grandparents, your parents, and a gen-xer and all would immediately recognize Wonder Woman. I doubt my g-rents would have any idea who the Hulk is, and they might recognize Spiderman because of the movies, but they wouldn't bat an eye in recognizing Wonder Woman.

Now, I might amend the list and say Superman, Batman, Robin, and then Wonder Woman. But people, young and old, who have never even looked at the cover of a comic book would recognize Wonder Woman. She's iconic because she's transcended her comic book origins. When non-comics people think of Superman or Wonder Woman, I don't think they think "comic books" first; I think they just think American pop culture character. Spiderman is on his way to being thought of like this, but I'm not sure he's reached that level yet.

Yeah, what she said.

I certainly wouldn't argue with you that Wonder Woman is more iconic than any of those heroes, but I don't think she's more recognizeable than those other heroes.

DC hasn't done anything to bring her to the attention of the non-comic book buying public since her tv show went off the air 30 years (or so) ago (with the exception of the Super freinds/Justice League cartoon, which don't really promote her any more than her co-leaguers). This will change when she gets her own movie, though Flash (and perhaps others) will also get this treatment, and he's appearing in basketball commercials now.

When those of us who read comics think of 'iconic' characters WW will certainly spring to mind near the top, but I really don't think the average person under 30 is more likely to recognize her than Spiderman, the X-men, and yes, maybe even the Hulk. Where in American pop-culture has she appeared since her tv show?

It dawned on me that when DC created the "World's Finest" comic the roster consisted of Superman, Batman and....Robin.

I never particularly liked Robin, but he IS number four, for sure!

As forthe FF being on everyone's mind... do you know the REAL origin of the FF? It's not the "imitate the JLA" thing, this is the TRUE story behind the story. Read my site today and get the real story!

SECRET ORIGINS OF THE FANTASTIC FOUR!

All of my friends are under 30, none read comics, and they know more about Wonder Woman than the Hulk or Spiderman. In fact, only a couple have even seen the first Spiderman movie. It might be because most of my friends are girls, but Wonder Woman holds more of a place on their pop culture radar than any Marvel superhero. Of course, all of this is anecdotal, do who knows for sure. :)