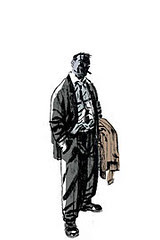 To this day, I can’t quite recall the bulk of what I learned in elementary school. Like most kids my age, I assume I learned what they learned. Some math, some ABC’s, the difference between red and blue, how to hang my coat on a hook. I do recall being able to do my work faster than most. Not because I was some kind of “genius child.” No, I think I was more interested in getting the work over so I could daydream of adventures contained within my school’s playground. I wasn’t a wordy child. The greatest compliment I ever received as a kid was, “You can give him a box and he’ll be fine all day long.” Boxes were nice but in the school’s playground I saw all kinds of possibilities. In the jungle gym, I could see my friends, swinging across Gotham, Batman-like, watching from above for danger below, while I on the sliding board, by diving down head first, arms outstretched, I became a Superman. In those brief seconds of “flight and fancy,” we kept story alive within the confines of the playground.

DC Comic’s anthology, Solo is designed to do so, as well. The premise of Solo is an intriguing one to creator and reader, alike. Take a creator and let them loose upon DC’s vast “playground,” so to speak. The creator is charged with 48 pages to keep story alive within the confines of the playground. Writer/artist Darwyn (DC: The New Frontier) Cooke is the creator-of-note for Solo #5.

To read the rest of the review, go to the "Links" section and click on "Thor's Comic Column."

Comments:
I have never even HEARD of this title!

It is that quiet or am I that out of it?

Loved it. Loved everything about it, from the square-jawed stylizations to the gleaming retro scene-setting.

Plus, in the background, you can catch Aquaman and Elongated Man sharing a beer.