Too Bad DC Comics Doesn't Have Something Like This. 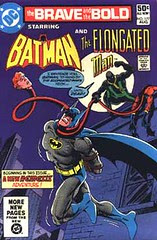 The Brave & The Bold
Originally uploaded by Devon Sanders.
Last week, I focused on "B" list characters and the fanboys who love them.

With the relative success of Cartoon Network's "Justice League Unlimited" proving that comics fans can love more than just seven superheroes, it made me ask, "Why doesn't DC have a comic book equivalent?"

I don't know, maybe... a comic where Batman could team up with...I don't know...The Question? A comic where a top-tier character like say Wonder Woman could team-up with...I dunno...The Creeper, maybe even Vixen. I'd pay to read that book. Especially if you got a top shelf writer like a, I dunno, a Mark Waid or somethin' and maybe a kick-ass artist like a, I dunno...J.G. Jones.

DC Comics used to have a comic book like that! I think it was called "The Brave and The Bold" or something like that.

Wouldn't be great if we had something like that? Wouldn't it be cool if it came out sometime in late '05 or early 2006?

Wouldn't that be great?

Am I the only one who's absolutely blown away by the recent Cadmus arc?

JLU is great. Really, really great. And not just because the writing is fantastic, the story is enthralling, and the voice acting has genuine emotion. No, JLU is fantastic because it manages to do something most comics can't do (or at least don't do).

Here's the deal: to enjoy/watch/grok/understand JLU, you only need one thing: to have watched JLU, and to have some rough idea of who's who. You don't need to watch the seven other shows associated with the main characters, you don't need to worry that some plot point that happened forever ago is going to haunt the story forever with only the most oblique references to remind you what happened. The series hangs together.

Sure, there's the occasional nod/reference/story arc that's rooted back in the old Superman/Batman cartoons from the mid-90's (by the way, I always get a thrill from that), but it's always explained in a handy, never-too-long flashback. These little flashes of history aren't burdensome, like the endless provenance of most modern comics -- they serve to give the current series a sense of depth. Big things don't pop up overnight, they build over time, like real, meaningful events. And the series is never afraid to throw a little light exposition our way, because they finally realized that telling stories that are accessible to more than the most devout, knowledgable viewers is a GOOD THING.

Hearkening back to your original point: the writers of JLU get how to do multi-character stories. Sure, there are more League members than you can shake a stick at, but it never loses focus. You always remember that these are stories about Superman, Batman, Wonder Woman, Green Lantern, J'onn Jones, Flash, Shayera/Hawkgirl...and that the rest of the folks, while important, are still supporting cast, in the absolute best sense of the word.

I'm concerned that if this were to be done in a comic, the writers would go to great lengths to try and convince us that The Creeper is as important a guy as Superman. He's not, and that's fine. He's not a main character of the DC Story (tm). And there are precious few writers out there that I trust to realize that.

Devon, from your mouth to DiDio's ear!

I wouldn't be surprised if DC were headed toward not just toward B&B, but other anthologies titles.

Western Tales, for its cowboy folk.

Kevin Smith was supposed to write a new Brave & The Bold back when his run on Green Arrow ended.

But let's not forget that there was also DC Comics Presents that ended during 1985. This was another team-up book where the team-up theme moved into Action comics upon Byrne's reboot. That didn't last long though. (But I did like the concept of "Superman IN ACTION with..."

I'm all for a new Brave & The Bold or DC Comics Presents but I would hate to have the books be "Batman and..." or "Superman and..." since those characters have enough titles they appear in already.

I agree that it shouldn't always be "Batman and..." I would say that any team-up title should have a main eventer to anchor it. One month it could be Superman, the next Batman or Wonder Woman with the next arc(s) specifically focusing on the teaming-up of B characters. (Firestorm and Zatanna, for example.)

Actually, DC IS publishing this book already. It's the comic adaptation of the JLU tv show, and its loads better than DC's current team books, and it does exactly what you talk about here. But grown-up superhero fans seem afraid of any book that might seem too "kiddish."

joe --
I've picked up the JLU animation-style comic (and the previous incarnation "Justice League Adventures" or whatever it was called), and I agree, they're fun and often well-written. But there's not even a whiff of continuity. Episodes of "Law & Order" have more continuity and ongoing storylines than the JLU "kiddie" comics.

Now, I don't want a title aimed at younger readers suddenly bogged down with neverending storylines, but if they can handle a little of it on t.v. with Teen Titans and Justice League Unlimited, you'd think they could handle it in a comic book. But yes, I agree that the JLU comic is great.

Maybe they could call DCU Classified and not only do strange and unusual team-ups but also do stories in different ages, not only the continuity that is happening now (a example of this is the Morrison arc on JLA Classified... it couldn't have happened any other time then just after the end of his run on JLA).

Why the hell not, Julio?

Why not? My opinion is that whole city in the sky full of grim and gritty superheroes couldn't had be ignored for so much time without having a impact on DCU. By happening on the end of Morrison's JLA run, at least make some sense why nobody complained that they hijacked the aerial space of destroyed country capital. Well maybe could have happened now, but sounds very illogical to me. And then they said that the Classiefied titles would be tied in continuity but not necessarily current continuity... in a way resembles what they tell the all-stars line will be (except All-Stars is to be really loose tied in continuity.)

I wish the word "continuity" would die already.