Yesterday, I Became A Man. 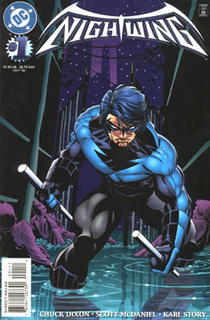 Yesterday was "Seven Hells!" three-month anniversary. Three months to the day, I saw this blog come full-circle. Three months to the day of my blog's creation, it was added into the links section of what I believe is one the greatest comic blogs out there, (postmodernbarney.com). You have to understand how cool I think this is.

(postmodernbarney.com) was the FIRST comic blog I ever saw and when I went in search of others, it was the standard I held the others to. I still read it everyday over a year later. Now, in a small way, I am a part of it. I was happy yesterday.

Just wanted to guve you all a heads-up on what's coming up on the "Seven Hells!" horizon...

A look into the mind of a crazy Black man! (For once, it ain't me.)

A look at the FIVE influential comics that made me a DC Comics fan!

A dual Absorbacon/"Seven Hells!" public acceptance of Rann's unconditional surrender (tendered by Robby Reed of Dial "B" For Blog, we hope.) and so, so much more!

Bookmark this blog, man! I promise you, I'll help you waste time...constructively.

Comments:
Congratulations! You're one of my favorite blogs, which is pretty awesome, since I've only been reading you for about a month :)

I can't wait to read about the 5 influential comics that made you a DC fan, 'cause I'm a little surprised to find that -- all of a sudden within the last 2 months -- I've become a DC fan too!

Thanks. I left a li'l something for you in the "Links" section.