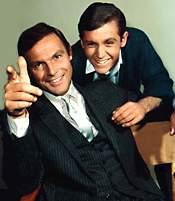 Batman to Robin after he suggestion that they alter the minds of U.N. officials following their dehydration at the hands of "United Underworld." (The Joker, The Penguin, The Riddler and Catwoman):

"No, Robin. No. It's not for mortals like us to tamper with the laws of nature."

Comments:
The best part of the Batman movie is him trying to get rid of the bomb. CLASSIC.

i grew up watching the series as a kid and when i saw the Batman movie as a college student, it was the bomb scene that made me finally realize that the series was supposed to be a comedy.