Simply put, she is one of the most amazing of characters but honestly, what she's lacking is a Rogues Gallery worthy of her iconic status.

Without further ado-do, I think I have put together a pretty damned good Gallery worthy of comics' greatest heroine. First up? 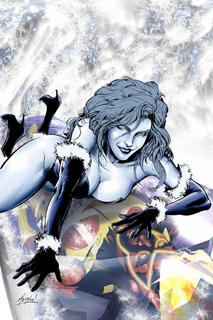 Quite possibly, the best thing ever to come from the Firestorm, The Nuclear Man comic. Possessing the ability to project waves of intense cold, Killer Frost is also, in effect, a thermal vampire. One with the need to absorb heat from all available sources. Her favorite of sources?

Dr. Louise Lincoln, the current Killer Frost was formerly the best friend of the now-deceased, original Killer Frost, Dr. Crystal Frost. Frost believed males had kept her from becoming all she should have been. Before she died, she passed on her powers onto her former friend, Louise. Could she have passed on some of this personality, as well? 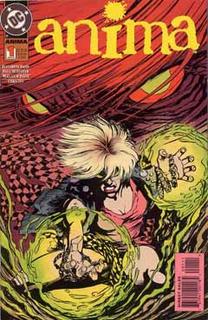 This forgotten DC hero had her own title in the early 90's. This young teen runaway's body contained The Animus, the embodiment of mankind's rage and masculine drive. Yes, she may have started out as a hero but let's face it: A young girl with the power to channel masculine rage begs for a semi-villainous makeover. Let it happen within the pages of Wonder Woman. 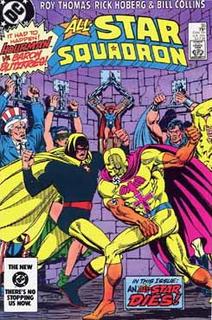 Blitzkrieg is a Nazi, a former concentration camp commandant during World War II and currently, a leader of a terrorist group. Needless to say, he's pretty evil. Wanna place bets on whether or not he bumped heads with Diana's mom, Hippolyta, during The Great War? Think he'd still be carrying a mad-on for whomever's occupies the mantle of Wonder Woman? He's evil. That's what a Nazi a-hole would do. This subjugator of man and womankind would make a perfect foe for The Amazing Amazon. 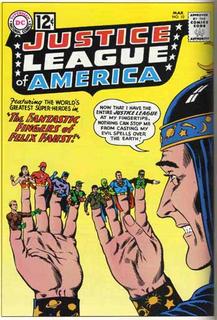 I always felt that Wonder Woman needed a timeless villain. The cartoon series Justice League Unlimited got it right in choosing Felix Faust to stand against Wonder Woman. Magic is the one thing that fells each of The Big Three. If you want to rebuild Faust's rep as one of The DCU's pre-eminent bad-asses, start it all in the pages of Wonder Woman. Have Faust take Wonder Woman to the limit in a knock-down/drag-out and trust me, The DCU will have to definitely take notice and finally...

What do Superman and Batman have that Wonder Woman doesn't? (No, not that, pervert.)

Any hero worth their salt needs a FIFTH DIMENSIONAL IMP! Superman has Mxyzptlk! Batman has Bat-Mite! Wonder Woman should have... 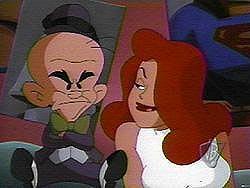 Yes, that is GSPTLSNZ, Mxyzptlk's girlfriend from Superman: The Animated Series. Have any other characters created for DC's animated universe made it big? Harley Quinn, anyone? You've got to respect any imp who gets the goat of the imp who gets Superman's goat. Imagine the hilarity that could ensue with Wonder Woman trying to train Athena's wisdom on a fifth dimensional imp. WHOOOO! I'm there! In Wonder Woman, have GSPTLSNZ fill the role Mxyzptlk fills every 90 days in Adventures of Superman: troublemaker and harbinger of bad things to come. Since her name's pretty unpronouncable, we'll just consider her Wonder Woman's tri-monthly visitor...

So there you have it: One Rogues Gallery made-to-order. See? I told you The DCU was a great place to visit!

So, gentle reader, am I on the right track? Am I on that sh*t again? Let me know! Feel free to add additions to the list, comments are a good thing.

The even better thing about Gsptlsnz is that she appeared in plenty of comics back in the fifties and (maybe) sixties. She was responsible for turning Jimmy Olson into a "porcupine boy" after he rejected her advances (IIRC). The most recent comic I remember seeing her in was the last issue of "DC Comics Presents" with a story written and pencilled by Rick Veitch. Mr. Mxyzptlk was being tried for bigamy, and she was one of his two wives. The comic book version of Gsptlsnz was about as goofy-looking as "original flavor" Mxyzptlk but they could do anything with a new version. They could make her look like the animated version or even do a "demented toddler" look, like Babydoll from the Batman cartoons. Really, the possibilities are endless.

I had NO idea Gsptlsnz was a DC Universe character! Thanks, BB!

Gsptlsnz appeared in Morrison's JLA run. It was in Crisis times Five the arc that dealt with a battle between two imps.

Baron Blitzkrieg first appeared as a foe of the earth 2 Wonder Woman, although the story was written in the 70's.

Well, there you go.