Foreshadowing of The Bat

What do we have here, hm? 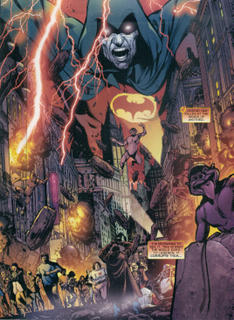 Is this page 15 of Infinite Crisis #1? Some would call it that. Some would simply call it a nice visual. I, Devon Sanders, would suppose it to be...

The Spectre does not just show up in Gotham with The Bat-Signal on his chest for nothing!

What could this mean, this Spectre of things-to-come hovering over Gotham?

Could Jim Corrigan, with his intermittent Gotham Central appearances, be nothig but a barrell of red herring?

Comments:
I bought Essential Werewolf by Night instead of Infinite Crisis today. And I totally don't regret it.
I understand one of DC's goal's is to return Batman to a less, well, dickish state, to be polite. I could accept Dick Greyson as Robin, or even a new replacement if done right (and not shoehorned in like Azrael), but making Bruce the Spectre would be like the old expression of mixing ten gallons of ice cream with ten gallons of manure. Except in this case the ice cream is a multi-million dollar license and the manure is manure three people have heard of or care about.

Superman and Batman are DC's bread and butter, so I can't see them making such a crazy change to Batman like that.

Besides, I think having the bat-signal across Spec's chest is just too obvious for it to be anything other than just a cool visual.

I doubt it'll happen, but I think it's a delicious idea. Batman finally gets to do what he's always dreamed of: bring justice to the millions of scum around the world, not just Gotham. No longer will he be limited by what his physical body can do or take. Hell, maybe he can find out who killed his parents and bring closure Spectre-style. I can see an Elseworlds story coming out of this.

Don't forget, though, we'll have more than one universe in which to make this happen when all is said and done...

Jim Corrigan: The Spectre, again. That's all this is leading to.

everything old is new again.

now if only rama kushna and the other mysterious cosmic voices of the sixties will make a comeback.

The most radical premise I can think of might be that Batman of Earth 2 (who was killed off sometime before Crisis) is resurrected to become the Spectre's new mortal host.

Alternately, Spectre may simply be "absorbing" the previously dominent mark over Gotham City, overwriting it with his own brand of vengeance.

Or maybe it's just a cool visual.

I think Corrigan will become the Spectre like he is supposed to be but....with the possibility of a multiverse again at DC there could be another universe that has Bruce as the Spectre.

That doesn't rule out Hawkman caving Batman's skull in with a blunt, medieval instrument of war, however. He still owes Bruce ten minutes.

I agree with the idea they won't make Bruce Wayne the Spectre's ghost long-term ...

He sure as hell could host Wrath for an issue or two, though ... before handing the reins over to Corrigan.

Yeah, the Bat-signal thing is deliberate, but why?

(An elaborate clue towards the Spectre/Blue Beetle theory, as they did just say that the Bat-signal currently in use in Gotham was the backup one, built by the Beetle?)

And I think the New Jim Corrigan thing is too obvious, unless it's a double-bluff.

And you kow, if Batman does become the Spectre, it doesn't have to be permanent. Boring Lantern got out of the job after a couple of years, so I don't see why Batman couldn't.

The Batman getting the kind of world-changing power he attacked Hal Jordan for wielding would be pretty interesting, but only if it was temporary. Walking a mile in a another man's pointy green shoes. Maybe he could borrow them off Dick Grayson, or from that glass case in the Batcave.

That could be it: Jason Todd's return leads Bruce Wayne to go mad and dress up as Robin II, and get inhabited by the Spectre because they share the same footwear.