Guess Who Has Gas! 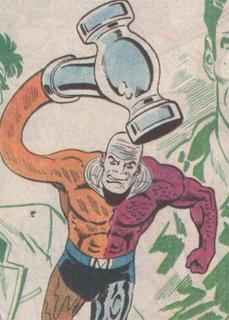 I, like many a current thirty-something, first encountered the character of Metamorpho in the 80's comic Batman and The Outsiders. I was not impressed, at all. In the pages of BaTO,Metamorpho was more often than not, portrayed as an incredibly somber li'l b***h, constantly pining over some chica named Sapphire Stagg. More often than not, Metamorpho was consistently drawn as a bouncing ball.

I mean, c'mon, son. You got to stand side-by-side with Black Lightning on a consistent basis and all you could do is whine and turn into a ball.

In my younger years, I smoked a bit of pot. If they made a Heroclix based on me, circa 1990, it would have had "Smoke Cloud" down the dial. I have hallucinated purple frogs and bowed at the waist to them because it seemed like the right thing to do at the time. I have been drug-free for years now. I now know why. I had to get my head ready to read DC Showcase Presents: Metamorpho, The Element Man.

I mean who could resist a comic in a universe where tycoons smoke phat blunts and exclaim gems like:

Certainly, not Devon Vincent Sanders. Who could resist hanging out with a dude who tells chicas to "Skip the true confessions lingo [and] strip for action!"

Did I mention that there are 558 more pages of this stuff?

Where did this guy go? He certainly wasn't hanging out with frickin' chick magnate, Black Lightning while in the pages of Batman and The Outsiders. That's for sure. DC, bring this guy back. He's interesting. His girlfriend wears go-go boots. This guy slaps Cro-Magnons silly for saying things like, "Look! It's [Metamorpho]-- making love to her! I can't stand to watch!"

Did I mention that while all of this was going on her daddy was furiously adjusting the cameras focus in order to get a better look?

If I ever find myself in the DC Universe, God, I beg of thee, make these be the words that I utter:

Just minus holding the blunt. I've grown up.

Comments:
I've said it before and I'll keep saying it -- DC has such a rich pantheon of characters and it's a damn dirty shame that so many of them scarcely see the light of day in favor of and endless stream of Superman and Batman titles. Unless you need a massacre. That's when the Freedom Fighters get to show up.

It his villains that wow me, like Edifice K. Bulwark, and Cha Cha Chavez.

Edifice K. Bulwark? I think I just got a spam email from him.

The collection had me at Soldier of Foturne Rex Mason parachuting out his plane and into the "Tin Lizzy" of Sapphire Stagg.

I mean, who can resist?