Legends: That Other Crossover 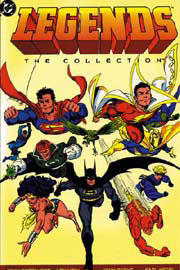 Is everyone still breaking their necks to either deify or vilify last week's release of Infinite Crisis #1? Somehow, simultaneously, everyone seems to have suddenly realized their either love or dislike of Crisis On Infinite Earths.

All well and good. It keeps the mind off of sex, drugs and Armageddon 2001, I guess.

Last week, in the LCS that I run I found myself inexplicably drawn to the trade paperback racks and sitting there, lonely and forgotten, was a copy of Legends. I read it and upon finishing it, I realized something. Legends, unlike Crisis, had impact. It holds up.

Where Crisis failed to cohesively reinvent The DC Universe, Legends pretty much accomplished what it set out to do: re-introduce and re-establish the icons of The DC Universe.

Post-Crisis, The DCU was a very fractured place with its' icons jockeying for some kind of identity other than the ones they'd had for some fifty years before. Gone was the Superman who built nuclear reactors while Lana and Lois clapped approving, unknowgly cheering for their own oblivion. That Superman was replaced with one who was like "us." He was burdened with human frailties, self-dou...

He was constantly explaining why he couldn't do the things he used to do. Why? The Crisis had made him more "man" than "super" and I was becoming very bored very quickly. I wanted to like this guy. He was always telling me why I shouldn't.

Post-Crisis, Wonder Woman hadn't yet made her grand superhero entrance. She was to busy learning English, looking at everything with wide-eyes and praying butt naked to Zeus while he looked on approvingly, thinking, "Daddy's trying to tap that ass."

We had a Batman. One not particulary interested in being seen with other superheroes. Thanks to Frank Miller, his head just wasn't there anymore. We had a Superman. A metrosexual Superman but a Superman, nonetheless. When would we ever have a Wonder Woman could join this crazy fray?

Legends established The DCU as it stands today. Legends re-ignited The DCU.

Where Crisis destroyed, Legends re-built. The Martian Manhunter, then languishing as a member of Justice League: Detroit is placed next to icons with a forward eye towards establishing him as the very conscience of The Justice League.

Where did the former Kid Flash, Wally West take his first steps in becoming The Flash for a whole new generation of readers?

Captain Marvel, once seen as nothing other than a lesser Superman is re-inserted into the DC mythos as simply what he should be: A young boy who with one magic word becomes enabled in conquering his fears.

When the evil Darkseid unleashes a scheme to turn public opinion against the world's superheroes, it's left to them to save the world that no longer wants but needs them and they did it. That's what heroes get together and do.

Legends hold up because it did what it needed to do, establish and get out of the way. Legends was the book that gave recent DCU inductee, The Blue Beetle, the light-hearted personality we came to love. Before, in Crisis, he'd been portrayed as a short tempered science guy. Without Legends, you wouldn't have liked The Blue Beetle so much.

Legends established The Justice League as something other than "Superman, Batman Wonder Woman and Everyone Else." Gone were The Big Three, replaced with lesser known yet just as capable characters like Black Canary, Dr. Fate and Guy Gardner.

Legends gave us The Suicide Squad, as well.

We'll love it for that.

Did I mention that John Ostrander wrote Legends?

Comments:
Bravo! I've never understand why Legends got so little love. It was excellent. The dialog was a bit stiff, but the plot and the point it made were spot on.

Though I generally like Ostrander's work, I didn't like Legends. I just found the story dull and predictable.

But you're right that it produced a lot of great stuff. DC had been retconning its universe piecemeal, and Legends was the first time they tried to figure out what the bigger picture of the DCU would look like. Organizations like JLI and Suicide Squad come naturally from that kind of "big-picture" thinking.

However, Blue Beetle's easy-going personality goes back to his series, which predates Legends. It wasn't quite the level it reached in JLI, but he was established as a rich corporate owner who was only serious if he had to be. His JLI personality flowed from this. If he was a little goofy when he was running his own company and facing super-villains solo, why wouldn't he be even less serious when he's a supporting character to Martian Manhunter and a Green Lantern (with even fewer responsibilities)?

i also enjoyed legends and feel that ostrander should write an Captain marvel series, i love the way he portrays the character.

I've got all the issues but they've sat there unread for years. I'll read them at Christmas (when I get access to the other half of my collection) and come back here early next year to let you know what I think ;-)

After reading your post I'm looking forward to it immensely.

The only thing I don't like about Legends is the portrayal of Phantom Stranger. He's every "horror/supernatural" DC writer's favorite toy, but he's usually shown with some consistency as a sober, mysterious figure. Here, he could have easily been replaced with Metron, and we would have lost nothing. In fact, the game he plays with Darkseid is far more suited to Metron than just about anyone else in the DCU.

But other than that, it really cemented a lot of the post-Crisis DCU history.

Speaking of Martina Manhunter, the guys at the Onion AV Club just voted him the most underrated character in comics (article excerpt to follow). Okay. Discuss....

Underrated superhero:
Martian Manhunter
Why? Pity poor J'onn J'onzz, sometimes known as the Martian Manhunter. While the general public knows Aquaman as a walking punchline, the image of J'onn's bald green head usually produces nothing but puzzled expressions. But he's been in comics ever since his introduction in the back pages of Detective Comics 50 years ago. A key player in every incarnation of the Justice League, J'onn is a leader with super-strength, telepathic powers, shapeshifting skills, a cool blue cape, and a soulful demeanor that would surely drive the lady Martians wild if he weren't sadly the last member of his race. Sure, there's that whole fear-of-fire problem (not to mention the fact that he seems to have died recently) but if his character hadn't been inconveniently exploring space when the Super Friends series was created, it's easy to imagine him being as common a household name as Batman or, um, Apache Chief.

The evidence: Bruce Timm and company have made excellent use of J'onn on the Super Friends-for-big-kids series Justice League and Justice League Unlimited. Or drop in on virtually any phase of the comic-book Justice League's existence, and it's clear that J'onn is the glue holding it together. Yes, even during the years when the group operated out of Detroit and featured such superstars as Vibe and Gypsy.

Ostrander did, in fact, write a Captain Marvel series, IIRC.

What a coincidence... I just noticed that I had a stack of the Legends monthlies sitting on the floor near my chair. (Along with... yep, the second Hercules mini from Bob Layton.)

I guess I'll have to pop those things out of plastic and read 'em. 'Cause I don't think I really appreciated them at the time.

Legends was a good, solid story. Byrne's art was great, the Suicide Squad, Captain Marvel and the all-new JLA launched, and the wrapup (why do we need/want heroes anyway?) came about 16 years before the new Crisis got around to asking those questions.

Why didn't it get the big love? No idea. I liked it better than Crisis, which I thought caused far more problems than it solved, and actually accomplished what it set out to do. Just my two cents.

Ostrander did, in fact, write a Captain Marvel series, IIRC.

I don't think so. At least not as a regular gig; I suppose he may have written an appearance here or there.

But the main post-Crisis stabs at Captain Marvel were written by Roy Thomas (the Shazam: A New Beginning and Action Comics Weekly appearances more or less contemporaneous with Legends) and by Jerry Ordway (the character's most successful outing in recent years.)