B.S. is reserved for those who actually care about the daily goings-on of Paris Hilton. We're creating a new place in "Seven Hells!" specifically for them. The older I get, the more I crave substance. I want things that make sense, wanting more situations and opportunities I can just reach out and grab. I need tangibility, order.

When I don't get it, I just want to bop someone over the head and just fly away from it all. That is why I want to be this man, this truest of men. The fourth of "Seven Hells'! Soldiers"... 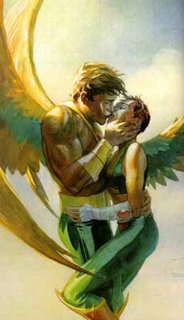 HAWKMAN!!!!
What makes him so special, you ask? The fact that he is a superhero? All superheroes are special!

No. What makes Hawkman special is that he really ain't. When you get to the heart of Hawkman or better yet, Katar Hol (Carter Hall), he's just a cop.

Katar Hol was a Thanagarian police officer who came to Earth hunting an escaped convict and decided to stick around for a little while.

An alien cop but nonetheless, a cop. There're hundreds of this guy back home!

How cool do you have to be come from another planet, have no superpowers and then be asked to become a member of The Justice League?

Apparently, in The DC Universe the ability to swing a mace while sporting a hairy chest truly, truly counts for something. It means something here, as well.

What truly strikes me is Hawkman's sense of self. When you're his friend, you become a friend for life. Your fight will become his. His sword will become yours. His mace, yours. Ask The Atom, Wildcat, anyone. Hawkman is someone you want by your side in any sort of fight.

What else do I like about Hawkman? He is, easily, the most romantic character ever created in the pages of comics, literally hundreds of deaths in the hopes of someday being reunited with his eternal beloved, Shayera (Hawkgirl). Somedays, I won't cross a street to be reunited with mine. (I keed.)

Who couldn't love a guy who's first living words are, "A hundred other lifetimes I've known. I remember them all--- but most of all, I remember you..."

Assist me to the couch! I think I'm going to faint! There's just too much man going on there.

Could he be romantic? Look no further than Green Arrow #12, upon hearing that his favorite target, The Green Arrow is also back from the dead and courting Black Canary, Hawkman tells him to, "Treat her with care and caution. Respect her boundaries. Do not rush her into a relationship just yet."

I strive to be this guy. I want to be secure enough in my manliness to walk around shirtless, dispensing justice and cautionary tales of love. The DCU is simply a better place because Hawkman is within it.

Now, I don't read a lot of DC at all, and Hawkman's munged continuity means that no way am I going to give him a go as a casual DC reader. But I read a Flash tpb the other day that featured a Hawkie cameo, and he came across as really cool.

He's like DC's Thor, except with less girly hair.

Read the JSA trade the Return of Hawkman, or just read the trades of the Hawkman series.

Don't worry; Geoff Johns straightens it all out.