Everyone has a favorite comic book character. Some have seven. I am one of those. The DC Universe is a full and vast place where characters like Catman can go from "ashy to classy" in the space it takes to tell six issues worth of story. A place where an announcement of an Ambush Bug Heroclix makes grown men and women all squishy with anticipation.

Because no one asked, happily answers the question, "Devon? Who are your favorite DC characters?"

No one asks and dammit, I always deliver! 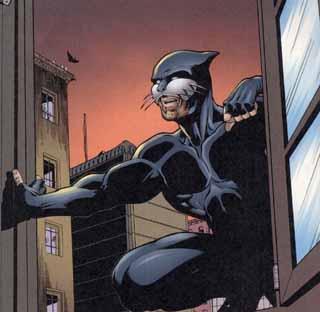 In the 40's, up-and-coming heavyweight boxer, Ted Grant was tricked into killing an opponent by shady promoters. Y'know, by using the ol' "Place-a-poison- needle-in-the-boxing-glove" trick. It happens to the best of us. Grant, knowing the promoters would kill him before the truth got out, overheard some kids talking about their favorite superhero, The Green Lantern. Inspired by his future comrade-in-arms, Grant went onto create the persona of Wildcat. Upon clearing his name, Grant realized he could use his fists to do more than smash opponents. He could smash...wait for it....

He's been doing so solo and as a founding member of the premiere superhero team, JSA since 1942.

Current retconning has revealed Wildcat as the man who taught self-defense to some of DC's greatest martial artists: Batman, Catwoman and his god-daughter, The Black Canary.

That, in and of itself, should make him cool but it ain't. What sets Wildcat apart from the rest of The DCU? In a universe of gods and monsters, Wildcat goes out with nothing but his fists. No super-intellect. No Power Ring. No super-strength. Just Ted "Wildcat" Grant. Ted Grant is his own f*****' gimmick and Ted Grant ain't no f*****' gimmick! He lives the life 24/7. How cool is he?!

For God's sake! His nickname is "The Big Cat!" That's the type of nickname you earn.

Well, he's just...he's just...just such a f*****' guy. He smokes his smokes, drinks his drink while staying out way too late. He LOVES big t*ts, grabs too much ass, apologizes later and still finds the time to be a role model to Stargirl.

Ted Grant is the man I suspect many of us wish we could have been.

Did I mention that in JSA #10, he single-handedly defeated a seven-man Injustice Society team, clad in nothing but a wet towel with a cast on his broken right arm, only after having phone sex with Catwoman?

What'd he do afterwards? Beer in hand, he, literally, picked his teeth clean with Blackbriar Thorn.

Wildcat is a Bill Finger creation.

What more reason do you need to love "The Big Cat?"

Name a character revealed as being the only person "man enough" to "keep up" with Hippolyta, Queen of MILF's and Amazons? 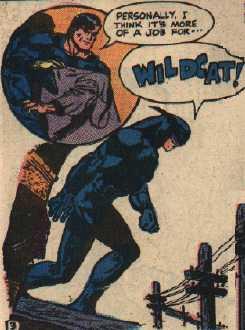 Comments:
Wildcat is my favorite character in the whole of the DCU, and I never really knew why until you pointed it out. He's Ted MF Grant!

He's the manliest of men, doing all the things that he should be reviled for in this politically correct time, yet he's just too damn cool for anyone to care..even the ladies.
Hippolyta, Black Canary I, Catwoman;
they've all had a taste of the Big Cat.

And his costume is brilliant in its simplicity; a black bodysuit with a cat-head mask. Pure function. The Big Cat doesn't need a gothic batsuit to stike fear into the hearts of criminals. He simply beats the fear into them.

And the fact that he's still doing it while pushing 90 makes him only that much cooler.

I think I have a serious man-crush on Ted.

That did NOT come out right.

To quote Birds of Prey: "You do not make fun of the champ's hat."

Ted Grant is a classy guy. I'm totally with you on this -- when it all comes down to it, I realize my favorite DC characters are the sort of fellas (and ladies) I wouldn't mind buying a beer.

My favorite is when Power Girl threw him out the window for being drunk and trying to start some shit with Wonder Woman at Thanksgiving. I've totally been at that family party.

I don't care, I've always found Wildcat to be boring, both in his modern appearances and in those Golden Age adventures of his I've read. Just a run of the mill superhero.

Your opinion is what it is: opinion.

Thanks for your contribution, M.

I always wondered why James Robinson didn't make more use of Ted in the late Starman series (prior to the current incarnation of JSA). Okay, so he might have been a little redundant with Robinson's creation Bobo Bennetti, but to think we missed out on an issue or two of Ted taking Jack Knight out drinking and raising hell...

It is a crime that Wildcat will not be starring in Snakes on a Plane.