It was Justice League: Europe #1, that first time I truly paid any attention to her...and them, those sun-kissed orbs. Oh, I'd seen her before but she for some reason she just never registered. Then, JLE artist Bart Sears just kinda put her out there on the cover for everyone to see. Somehow this...girl...was more woman than Wonder Woman! Upon reading, I registered more than just the obvious. Right there, in all her glory, putting the skids on The Fastest Man-Child Alive's clumsy advances, exhibiting something many DC characters seemed to lack in The 80's:

Where Wildcat had to hide his in a sack, she wore hers out for the world to see, daring anyone to disrespect her right to do so. Where Wonder Woman politely asked for equality, this character demanded it. She embodied everything Wonder Woman envisioned, just yesterday. She was the first female character I'd ever read who knew it was OK to not always be willing to "smile pretty for the camera."

Number Six? Who else could it be but...? 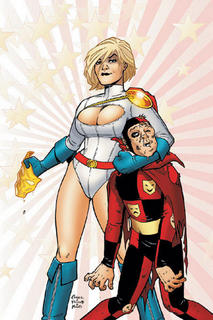 Whether kicking The Psycho-Pirate's ass, running her own software company or taking the piss out of Wildcat, you know what you're going to get from Power Girl: one woman launching all-torpedoes, hammering whatever's in the way, whether it be a wall, a bad guy or a boilermaker, looking fabulous in the doing so.

Where I admire Wildcat for being a guy, I LOVE Power Girl for simply being a bit of...well..a broad. She wants whatever the day brings, making no apologies on how she went about getting what she could out of it. She is a character in all ways possible and positive.

Since that fateful day, I haven't looked back, only forward. It is simply the best way of appreciating her.

Pirate, you have no idea how many characters would love to be where you are right now, basking in the glow of those sun-kissed orbs.

Comments:
Devon, couldn't agree more. Power Girl is a great character-- personality and looks together make her a "kickass Supergirl." Hopefully she'll be able to sustain her own book one of these days.

If she survives Crisis 2... Given all the thematic nods to the original, I wouldn't be surprised to see a Supergirl die, but which one?


And this Seven Soldiers For Seven Hells thing is starting to look a lot like the JSA. Nothing wrong with that as such, but it's making the premiere league guys look bad. ;)

Two for two. I knew there was a reason I liked you Devon.

Wait'll you see who makes the cut tomorrow.

You may have had it register in JLE because she was drawn a bit more modestly in the early 80's. I just flipped through a copy of Infinity Inc. #1 yesterday and noticed her neckline was above her breasts. I also noted that said breasts, while a pleasing size, weren't noticeably different from those of the Huntress and Fury.

Let's here it for a universe that allows its heroes have different sized breasts!

Working on it! It got grander than I initially planned on.