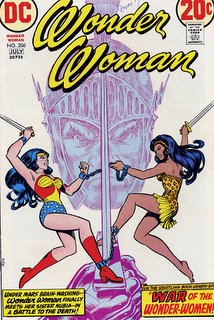 I do not do this thing easily but DC refuses to get off the pot, so to speak...

Nubia has to go. It's for her own good as no one in DC Comics knows what to do with her anymore. Created in the 70's, Nubia was, I'll say it because I
can, a bit of an affirmative action baby and DC retconning gone wild. While sculpting the clay that would go onto become Wonder Woman, Queen Hippolyta also found the time to sculpt another baby from brown clay...

So, then, like Mars comes in and snatches the Black one and Wonder Woman was short like, one sister.

Well, since that story was published not much has been done with her pre or post-Crisis and that's kind of a shame. Get past all of the crazy Seventies pontification and you could have had another strong enduring female character the likes of Vixen or Power Girl.

Hell, you'd have thought Nubia would have been more of a lock for the title of Wonder Woman than this feeb but in typical Nineties DC fashion, they went and created something synthetic instead of using something cut from cloth.

Look, I think Nubia still has a ton of potential but dammit...

at Marvel she'd have a better chance of making it. At Marvel, she'd be running The Avengers in something like two weeks. Storm would finally have a girlfriend to go shopping with. It must be lonely being Marvel's only Black female. Luke Cage and Black Panther would just have to date her because every Black character at Marvel has knows one another.

That's just the way it is over there.

Nubia, I'll miss you but DC won't even know you're missing.

Comments:
To be fair, isn't one of the Daughters of the Dragon (Misty Knight, I think) a Black female Marvelite? Not that she's exactly high-profile.

And yeah, I would totally set up Nubia as the CEO by day/Warrior champion by night of some company or corporation. Make her a low-tech Tony Stark, which would at least make the inevitable crossover with Black Panther believable. :)

Thanks, Chris. I'm enjoying yours, as well.

Seriously, though, even her HeroClix representation is underappreciated. I think a Mars-driven version of WW has some potential -- I might try hunting down those old stories.

Honestly, I'd never heard of Nubia before this post, but seeing the brief summary, I'm surprised she didn't show up in War of the Gods. Unless she did, since I've never read WotG either, but I don't recall hearing about her. Anyway, what with all the Greek gods fighting their counterparts, one would think that Wonder Woman would need to fight her Mars-raised doppelganger too.

And you know where Nubia was introduced, Tom?

the same issue as the Dr. Domino story!

It is embarrassing how often I make that mistake. I'm not even remotely kidding. It happens all the time, and I smack myself in the forehead each time.

That said, I want to reiterate that even contemplating Wonder Woman's future (or lack thereof) in the DCU makes me terribly, terribly sad.

And I used to think Deathstroke was the Wolverine of the DCU in terms of implausible number of cameos -- nope. It's clearly Donna Troy.

Nubia only appeared in WW for 3 issues (#204-206), pre-Crisis, had one guest shot in Supergirl and appeared briefly in Super Powers. I don't think she's been seen at all since Crisis in any form.

Artemis is actually a post-Crisis revamp of the similarly red-headed replacement Wonder Woman, Orana who appeared in WW v1 #249-250 before losing a game of bullets and bracelets.

I saw those post crisis issues where she's now "Nu'Bia"... Did they scrap the "she's my stolen black twin sister" angle?

They can't hold a candle to Vixen of course, titled cancelled before it even appeared: now that's impressive!

Has DC even enough Black superheroes to meet up? How many ever made the JLA?

Not counting Milestone that is?

Actually, DC has quite a few Black characters running around. Four of which made JLA: John Stewart, Vixen, Bloodwynd and Steel III. Six if you count Amazing Man II (who was in Extreme Justice) and Black Lightning (I remember him included as a reserve in the Amazo issue awhile back)...