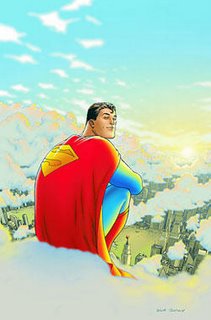 I've often said that if I have any sort of morality about me it came from my family and comic books.

Somehow, after the things I've had to bear witness to, I still believe in justice.

I believe that in order for an American Way to exist, truth and justice must take precedence.

I believe in helping those in need. I believe in the ability to overcome impossible odds in the pursuit of something better.

After all these years, I still believe that a towel tied around a child's shoulders is one of the most beautiful, most purest of things.

After more than 30 years, I still believe in Superman.

Comments:
Seconded! But man, if Superman is your #3 countdown choice...who on Earth could be #s 2 and 1?

I hope there's going to be a groups round-up at the end of all this. Perhaps even a Photoshopped composition of the Seven Hells Soldiers together.

Hm, I would pretty much say the same thing... except I tend towards Capt. Marvel rather than Supes...

Wonder what the difference says...

A truly beautiful post. In these days, in the shades of gray of the adult world, we all should learn to look for the red, blue, and yellow once in awhile.