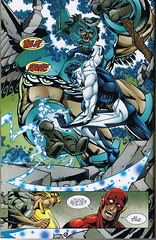 Comments:
I got chills reading your summary of one of the better JLA arc from those lost days.

I swear, that's one of the all-time great hero moments. Superman facing down an ANGEL of the LORD, one of the mightiest of the host of heaven. It's absolutely balls-to-the-wall nutty. Asmodel is described as having heartbeats like a thousand Hiroshimas, blood thousands of times more pure than our strongest acids. He is divine vengeance and power incarnate.

And SUPERMAN faces him down.

Only Flash takes a moment to notice just how freaking INSANE that is, in all the best ways.

For the record, this is a few minutes after Superman PULLED THE MOON BACK INTO ORBIT like it wasn't no thang.

Oh, and Wonder Woman beats up a chariot of heaven.

Say what you will about Morrison, the man knows from epic. That, and he writes a totally badass (non-asshole!) Batman. Need I remind anyone of the hung Hyperclan member with the note taped to his chest: "I know your secret."

How can you NOT love the JL? And I haven't even gotten STARTED on the end of last season's JLU.

The Flash steps it up. Man, I'm getting jittery just thinking about it.

Comics are great, aren't they?

Ladies and Gentlemen, I present to you Defense Exhibit A in the case of the people v. Grant Morrison: the Morrison JLA.

It is one of the top 10 runs of any writer on any comic.

If you disagree, well, you're wrong, but that's OK.

Thanks, Devon, for making me leave work early to go home and reread this issue.

My favorite bit was when Aquaman said "Katar?" when he saw the shadow of wings. It may seem silly, but back then you couldn't even say the word Hawkman and it was nice to have Morrison keep the faint glimmer of memory alive.

I remember reading that story in trade for the first time, and going, "Damn, I need to start reading comics again!" Morrison made the JLA incomprehensible at times, but it was always well-written and fun. Damn, now I need to read that before I go to bed...

Yeah, I'm no DC fan, but that's comics gold.
It's such a shame that DC's crossover mania makes that JLA run as a whole something of a bitty read. Morrison has problems keeping arcs going when characters are off in some story or another somewhere else.

I don't think he did; that's part of the greatness.

WW's dead? Not in the dystopian future ruled by Darkseid!

Wally broke his legs - but he'll be better in the latter half of the arc.

Superman has electric powers; but check the shit he can do with 'em.