The Future Ain't What It Used To Be

Last week, I was lurking in my cave and came across many finds. I ran across two comics written by one of my customers, a long-thought-lost She-Hulk graphic novel and something we'd all lost nearly twenty years ago... 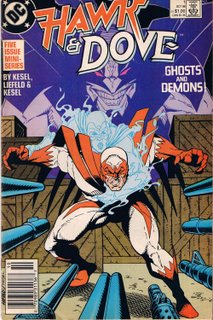 Rob Liefeld's potential.
I did not, in fact, come to bury the man but to praise him. Imagine a 16-year old kid's surprise as he went to his local drugstore and seeing Hawk & Dove #1 on the rack. I was practically floored! How could this be? How could there be a Hawk & Dove comic! I'd seen Dove die in the pages of "Crisis On Infinite Earths" just two years earlier! I paid my dollar, went home and waited to have my mind blown... 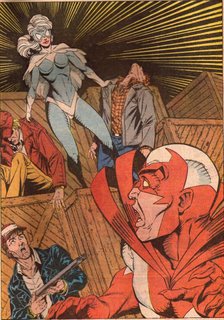 I wasn't disappointed.
More important to what I'm now writing, I wanted more from this artist. He wasn't drawing "classically." His anatomy was a bit off but man, you could see that this guy had "it." He could do it all. 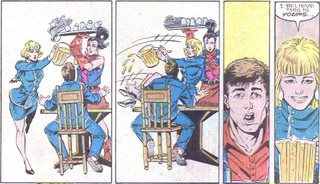 His panel-to-panel work conveyed a real sense of pacing. 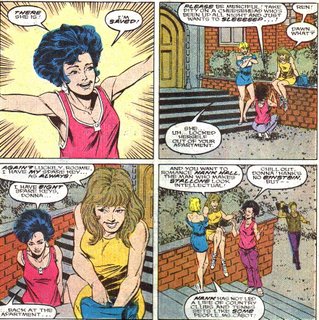 Heck, he could even draw "quiet" scenes pretty well.
Liefeld looked to be the future of comics but somewhere along the line... 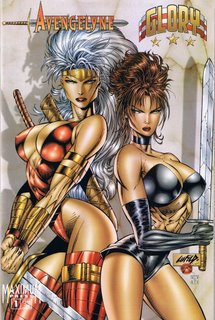 ...the future developed strangely. Liefeld began relying on distortion and glamours in order to distract from his lack of artistic development.
The future never quite lived up to the promise a sixteen boy invested into it. Over the years, he simply learned to accept whatever was handed his way. In 1988, the future looked very bright, indeed. 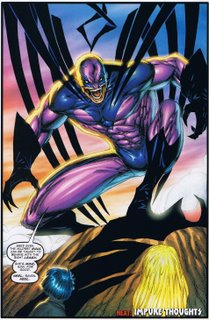 Comments:
I think, if you look closely at the credits of those issues of Hawk and Dove, you might see a name that may explain where that "future" went.

See that name, next to the word "Inker" - if I recall correctly, that name is "Karl Kesel". A man who could make ME look good (and I can only draw stick figures - badly) if he were inking over my pencils.

The role of the inker is a vastly misunderstood and underestimated one in comics. When I was younger, I didn't know what an inker did - I figured he traced over the pencils, sharpening them up for publication. HA! Maybe in the old days when inkers came around so that pencillers could crank out more issues. Now, a good inker can make miracles happen. I have strongly suspected that at least part of Liefeld's transformation from "the hot new guy working on Hawk and Dove" to "the guy with the weird style on X-Force" to "who drew this POS issue of Youngblood" can be attributed to the quality of the inkers he was working with.

I've got a random issue of New Mutants with a Liefeld pin-up of the team in the back and it's really not bad at all. I feel like people told him he was really good and he just stopped trying at some point, and then we end up with Kestrel being ninety feet tall for no reason and Robin being forty years old.

I think, if you look closely at the trade paperback at the Hawk & Dove trade you'd see Liefeld's actual pencils. They were fairly tight. You could see a "ton" of potential in tose pencils. As an inker, I'm sure Karl Kesel did and proceeded to make them as great. I think Kesel would agree that if there weren't something to work with there, then he would have asked for a "penciller" credit on H&D, as well.

I have no doubt Kesel inked the pencils knowing this kid was "rough." My argument is that Liefeld never bothered to go beyond that.

Not that I'm accusing YOU of that.

Which Kevin Smith movie talks about inkers? I've only seen Dogma, and I don't remember it being in there... (Is it in Mallrats? I've always meant to see that one for the Stan Lee appearance, but I've never gotten around to it). I learned what inkers do by going to cons and talking to inkers and pencillers, mostly, and by looking at quite a few sets of pencils that "hot" artists have posted on the Internets and comparing them to the final results - a good inker and colorist make a lot of difference.

Yeah, I see your point, and I can understand what your saying about him having potential and never growing beyond that. I think I agree that somewhere along the line he stopped developing his craft.

This ;-) shoulda been behind that, Jer.

Jer - The Kevin Smith movie is "Chasing Amy". It's his most serious of the "View Askew" universe pictures.

Devon - So Barbara (Randall) Kesel is a customer at your store? I heard they were divorced; what name does she go by these days?

Actually, the customer I was refering to isn't her. Would LOVE to have her as a customer, though.

Either that, or he decided that what people liked were the idiosyncracies of his "style", so he kept cranking them up, resulting in freakier and freakier art.

Yeah those idiosyncracies being that everyone's pecs are so large that it looks like they have some massive rack. I mean have you looked at his Teen Titan's issues? Cyborg looks like he is sporting some Double D's man. I don't want to be thinking those thoughts about Vic Stone. Especially with those full lips that Liefeld gives everyone or their tiny noses. Have you noticed how tiny their noses are. Such tiny noses.

I think this should serve as warning for DC's one year later books. Yes, they're all full of potential but how often is that potential realized?

If it's that frustrating to us, the readers, then how frustrating must it be for the creators?

Thankfully, I missed a lot of the nineties.

Devon: one of the miniseries issues was completely redrawn by Kesel after Liefeld. for some reason or other, delivered them drawn sideways...

Liefeld, for some reason or other, delivered them drawn sideways...