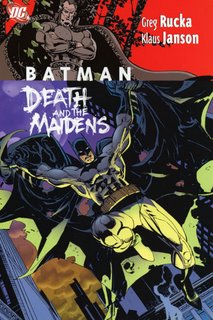 It happened. I don't know exactly when it happened but it did.

I got older than most of the characters I read about.

Years ago, I became older than Spider-Man and I was OK with that as Spidey's inability to make the rent for the month simply reminded me that I couldn't either, so I started saving money by not reading Spidey. (That was over four years ago and my money's good but dammit... Marvel if you stop with the "legacy of spiders" crap, The "Gwen Stacy/Norman Osbourne mutant babies" and "The Other" crap and learn to tell fun stories again, I might come back. One can have their senses shattered by story only so many times!)

I became older than Kyle Rayner and you know what? I really started seeing him for what he is. "That Neighbor Boy." Y'know, that one kid in the neighborhood who you tried to hate but just couldn't invest yourself 100% into doing so. One minute he'd choose to take a whiz in his front yard and the next day, would just as inexplicably be helping an old lady carry home her groceries. He was a bit "off" but dammit, he had a good heart so you knew was gonna be alright in the long run.

Getting older hurt the most when I realized I'd become older than Batman. In the Batman: Death and The Maidens TPB, writer Greg Rucka states The Waynes were killed when Bruce was eight. He further goes on to say that Bruce has been living with the pain twenty-five years. As of last month, Bruce Wayne is officially younger than I am.

I could live with it if I were still able to do a backflip.

Comments:
But you've got a long way to go before your older than Wildcat, and he's still out having fun.

f***ing haole beat me to it

You can still do a backflip, dude.

You just can't do anything afterwards.

Have you read Mark Millar's 12-issue run on the Marvel Knights title? I thought it was great. I'd been thinking about checking out Stracynzski's Spidey work, until I heard about the "Gwen Stacy/Norman Osbourne mutant babies". So now I've made a point of avoiding JMS' comics!

I did, BENN. I couldn't get past the first 3 issues. I just couldn't do another "Aunt-May-in-danger" story.

Man, I can't tell you how disappointed I was when I realized I was older than Superman and still couldn't lift a battleship over my head.

Ugly and stupid to...

He's been living with the pain for 25 years--but for about six years before that, he was drugged out of his gourd to cope in a haze of chemical euphoria.

Or so you can choose to believe, if you want to retain your relative youth.

Hey I just recently became a teenager and it still feels weird not being a kid. Now I know what they mean when they say "You're only a kid once."

As someone who's been a fan of teenage superheroes since I was a teenager, I was really upset to realize that I am technically older than even ones created before I was born. Like Rahne Sinclair (Wolfsbane)--even though she got the "grizzled mid-30's" treatment by Rob Liefield, in Marvel continuity she's technically 19. WTF.

For further rants on aging heroes, ask Amy, any time.

I get the same feeling reading Rolling Stone. Sure, I'm not as old as Neil Young, but reading about new bands is depressing.

Interview samples: "The first show I ever saw was Green Day, and I was, like, 10." "I was really influenced by Nine Inch Nails - that stuff's classic!" Oh my. Can I like your music if you're only 19, or is that creepy?

The other day I was talking to a 24-year old woman and a Nirvana song came on. I laughed and said, "Hey, it's Nirvana, Dave Grohl's other band."

She said, "Dave Grohl was in Nirvana?"

I'd never felt so old.

Okay, that shouldn't make you feel old, that girl is just stupid. No offense if she was otherwise a cool person, but for the love of God a 24 year old should know the names of the members of Nirvana.

Dude, I'd be happy if I could have EVER done a backflip. I've managed backward head-flops but that's it.