A Typical Conversation Between Scip And I 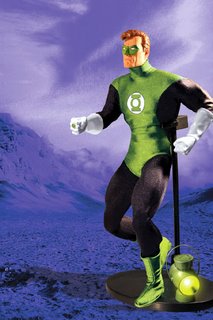 Scip: Does it come with a yellow ceiling tile?

Comments:
I think at some point in our lives, we've all wanted a thirteen-inch "Hal Jordan."

Because, you know, he's a great comic book character and having a large scale figure of him would be lots of fun for his fans.

What? Why are you looking at me?

Actually, as I consider the comedic potential of having a poseable Hal doll and a digital camera, I am rethinking my decision, Devon...

I bet a creative mind could manage a nifty display with yellow mosaic tiles...

Do we get a posable John Stewart so we can film the fight?

Does it have a flexible neck, for realistic "head trauma" action? The concussions won't look as good if the neck won't bend.

Also, is the head solid or hollow and smushable? When we get the inevitable photo of Doll Hal's head mashed beneath the paw of one of Scipio's dogs, will he look merely undignified or will his head be wafer-thin?

I would want to make an MPEG recreating the ceiling tile scene using Cheezits....