Because Of You, We're All Taking Golden Showers Vol. 3 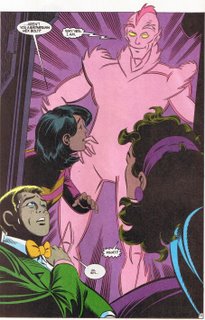 I mean, c'mon... how could you possibly not love a comic with such a wonderfully scripted introduction scene?
By the way, the cute questioner's name happens to be Kiku. She's also the last of the Bahdnesians. The Bahdnesians believe Johnny Thunder to be some kind of god. I guess that makes Johnny their version of Jerry Lewis or something.

Anyway... with her being the last Bahdnesian and Johnny Thunder getting up in age, writer Len Strazewski seemed to be positioning Kiku as rightful heir to The T-Bolt (or Hex-Bolt).

Until someone decided The Bolt should go elsewhere...
I like him but let's be honest, he can be portrayed as a bit annoying at times.

She hasn't been seen since. Which is a shame. The "Last Of" theme runs deep within DC's comics (Superman, Last Son of Krypton, Martian Manhunter, Sole Survivor of Mars) and I believe Kiko would have made a fine successor to Johnny Thunder. I mean, how could you deny someone whose first line of dialogue is "Excuse me, aren't you a Bahdnesian Hex-bolt?"

That takes spunk. That takes pluck. Kiko had that in spades. Kiko needs to be re-introduced to The DCU.

Now, that I would love to see. That would be "so cool."

Comments:
That would be "so cool."