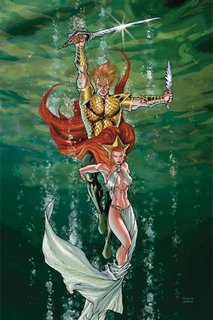 Kurt Busiek has written virtually every character in The DC & Marvel Universes. Whether writing 1996's groundbreaking Marvels, his superhero pastiche, Astro City, the sword & sorcery of Conan or being chosen by Marvel & DC to script THE comics event of the century, JLA/Avengers, Busiek has proven himself to be one of comics' most valued of assets. Today finds him under exclusive contract to DC as the upcoming writer of Superman and charting the adventures of Arthur Curry within the pages of Aquaman: Sword of Atlantis. This week, we sit down with him to talk about his work on Aquaman: SoA.
# posted by Devon Sanders @ 11:00 AM

Comments:
I don't think I need to be Scipio to point out that I don't believe Kurt Busiek has ever written Vibe.

He sorta did, just a little bit. There was at least one scene in the JLA/Avengers story in which the JLDetroit appeared.

He also wrote the two issues of JLA immediately before Vibe's debut, so he was clearly setting the stage for the character's creation.

No kidding? Well, then I take it back. Sort of.