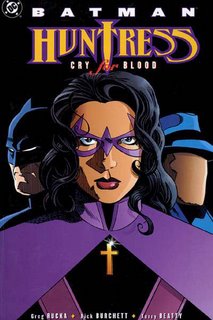 We all have them. A few have even been realized. Mine personally was to see Grant Morrison & Frank Quitely on Superman. Now, thanks to All-Star Superman: dream fulfilled.

So, my question to you "Seven Hellions!" is this:
"What writer/artist/character combination would cause you to go all ga-ga in anticipation?"

Any writer. Any artist. Any character. It's just that simple and because I'm just that nice of a guy, I'll even get the ball-a-rollin':

Writer: Greg Rucka
Artist: Rick Burchett
Character: The Question
Writer: Warren Ellis
Artist: Sam Kieth
Character: The Creeper
Got it?
Then, have at it...
# posted by Devon Sanders @ 9:58 AM

This might seem a bit 'mild', but I think there aren't enough 'mild' comics out there.

I'm not a big GL or Warlord fan, but those talent matchups sound so tasty that if they happened, I'd freak out.

Pat Mills and a rotating art team of Frank Quitely and Richard Corben on Legion of Super Heroes.

The top 2 I would love to see the most but i dont' know if the creative styles would mesh well...

8. Marv Wolfman and Gene Colan on the Phantom Stranger

Paul Pope on The Metal-Men just because.

Can I just have back:

Because well, those really were the best.

That would totally rule!

May have more later, but these are freakin' awesome & you know it

Mark Millar and Dan Brereton on a Zoom/Reverse-Flash miniseries!

Everybody who's on Batman and Detective Comics now, and both upcoming creative teams. <3

(Of course, Cable & Deadpool rocks. But we can give him a second monthly!)

Mark Waid and Mike Weiringo on pretty much anything they want to work on together.

Oh yeah! Karl Kesel and Tom Grummet on Fantastic Four! That would be some good stuff right there!

Andy Diggle and Jock on Batman.
Peter David and John Cassaday on Superman.

James Robinson
and anyone
on anything monthly and permanent

Ooh, tough one! Off the top of my head, I'll chime in with five:

I'd be happy with just Simonson on a quasi-Thor run of titanic battles with monsters of myth, folklore, and the imagination. But toss Whedon into the mix with his mastery of humanized super-women and grounding metaphor (and star power doesn't hurt) and this could be the run that makes Wonder Woman worthy of her spot in the trinity.

"Airwolf" Campbell turned me on to the genius of Davis's Strange (as if his Captain Britain and Excalibur weren't enough). Any one of the Vertigo Brits could pull off writing chores, but I go with Gaiman because fantasy is his forte. And who better to relieve Davis in those labyrinthine Ditkoscapes than PCR?

I need to check out Ferry's Superman work if it's anything like the amazing Adam Strange. A dynamic artist who made outer space cool again. Oh, and writer universally acclaimed for his limitless imagination writing a character whose power is limitless manifestation of imagination? Next question.

I didn't plan on using the same writer twice, but since I just advocated some Morrison idea-bombing for Iron Man over on The Hurting, I didn't want to wuss out now. As for Joe Mad, say what you want about his hyper-boobed women, Americanized manga style, and whenever-he-turns-off-the-X-Box work ethic, but the guy does three things very, very well: robots, giant monsters, and high-octane action.

Honestly, if Chuck Dixon and Gail Simone had a kid together, he'd be my pick. As it is, I don't really care (other than Chuck or Gail, of course) who writes the Birds, so long as I get to see Darwyn draw them. Globetrotting action chicks? Ties to Gotham, post-war JSA, the mafia, and a middle-aged rich archer with the world's most active libido? Cooke's done all this before, just never before in the same place.

That'd be pretty awesome, right there.

Talk about a waste of talent. MAYBE on Dr. Strange or something..but Iron Man?? Give Iron Man back to David Michelini or John Byrne or Roger Stern..but Grant is meant for better things...

Well, I wouldn't want Grant Morrison on Iron Man the way Tony is usually done (corportate shenanigans, international political intrigue, industrial terrorism, and Tony's various health problems). But IM sorely needs an injection of the kind of broad ridiculousness Morrison is so good at, if only for a short time, just to open up the possibilities inherent in a character who has been stuck in the same mode for 40 years. The whole appeal of Tony Stark is that he's an inventor without limits, yet somehow the Iron Man armor hasn't progressed much beyond "stronger repulsor beams!" Even just six months of Morrison idea-bombing, even if everything he does is ignored immediately afterwards, would go a long way toward helping other writers think outside the box.

I think the problem with the Morrison on Iron Man issue is that Iron Man NEVER had wacky roots at the early inception of his comic. Many Golden and Silver Age characters had a certain 'crazy' aspect to their stories with a lot of imagination during their formative years. I think that Morrison does great things with taking those innate qualities, modernizing them, and making them entertaining without appearing out of date.
Iron Man has always been a fairly simple book that has never been one to extole friviolity. Ever seen an "Iron Man A-Go-Go" or really hilarious Iron Man villain? Nope. That's because it all been pretty serious, spy-espionage, science fiction, type stuff. Iron Man doesn't fight extradimensional imps, hallucinogenic lovecraftian conspiracies or do funky things that have the word "funkadelic love god" in them. and he NEVER has. I like Iron Man, but there's never been any humorous, fun aspects to the character but he's pretty 1-dimensional. I don't doubt that Morrison could write an entertaining Iron Man book..I just don't think that given Morrison's gifts that he could write any more entertaining an Iron Man book than, say Roger Stern or Mike Grell

If someone's needs a brick, call me. I just crapped one.

I want to see this title split up between stories of the new generation and the veterans (and expanding the page-count to allow for backup tales). The main focus of the book is on the next gen golden age heroes which includes Stargirl, Atom Smasher, Sand, Black Canary, Hawkgirl, The Ray, Jakeem Thunder, Power Girl, and led by Mr Terrific. The old timers only show up in these stories once in a while in an advisory position, with the new JSA getting the action and keeping the legend alive. The added backup stories focus on past tales of the original JSA (by James Robinson and rotating artists including Guy Davis, Matt Smith, Warren Pleece, Chris Weston, Michael Lark, and many others), much like the "Times Past" features in Starman.

Let's just give Matt Wagner an ongoing Batman book of his own and let 'er rip!

and Robert Kanigher and Ross Andru on Thor!

Giffen, DeMatteis and Maguire on Champions, Damage Control or back on Justice League.

In a better world, Dan Slott and Seth Fisher on Shazam!.

Alan Moore and John Totleben on the Creeper.